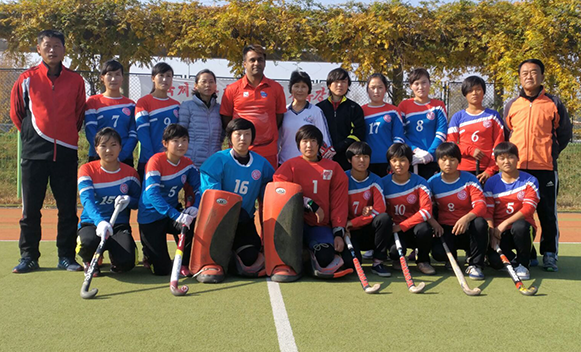 The International Hockey Federation (FIH) has revealed it has put together an action plan with the objective to see the participation of a unified Korean hockey team at future events, potentially including next year's Olympic Games in Tokyo and its qualification process.

A meeting was held in Lausanne last week between Tayyab Ikram, an FIH Executive Board member and chair of the FIH International and Olympic Relations panel, and relevant stakeholders, with future steps to reach the goal of North and South Korea playing together as one team being discussed.

"FIH firmly believes in the power of sport to act as a catalyst for peace and will therefore decisively continue to play an active role for this cause," the world governing body said in a statement.

A build-up meeting on the matter was held at the FIH Congress in New Delhi in November of last year.

A number of concrete proposals, such as joint training camps or exchange programmes were made, with both Hockey National Associations stating their intention to consult their respective National Olympic Committees and Governments on this vision.

The FIH’s announcement marks the latest example of sport bringing the neighbours together.

Both Koreas marched together at the Opening Ceremony of last year's Winter Olympic Games in Pyeongchang and a joint ice hockey team played in the women's competition.

Further moves saw a squad of cheerleaders deployed and, arguably most significantly of all, a high-level North Korean delegation travelled and included Kim Yo-jong - the younger sister of the country’s leader Kim Jong-un.

The build-up to Pyeongchang 2018 featured strained rhetoric between Kim and Trump over North Korea's nuclear programme and missile launches, but sport is seen as a vehicle to achieving peace.

Both Koreas competed together in three sports at last year's Asian Games in Jakarta and Palembang, winning a dragon boat racing gold medal.

They have also joined up in handball, judo and table tennis events.

A joint march could be held again at the Opening Ceremony of Tokyo 2020, where North and South Korea have already agreed to field joint teams in women's basketball, canoeing and rowing.

The two countries, technically still at war, are in talks about a potential co-bid for the 2032 Summer Olympic and Paralympic Games.