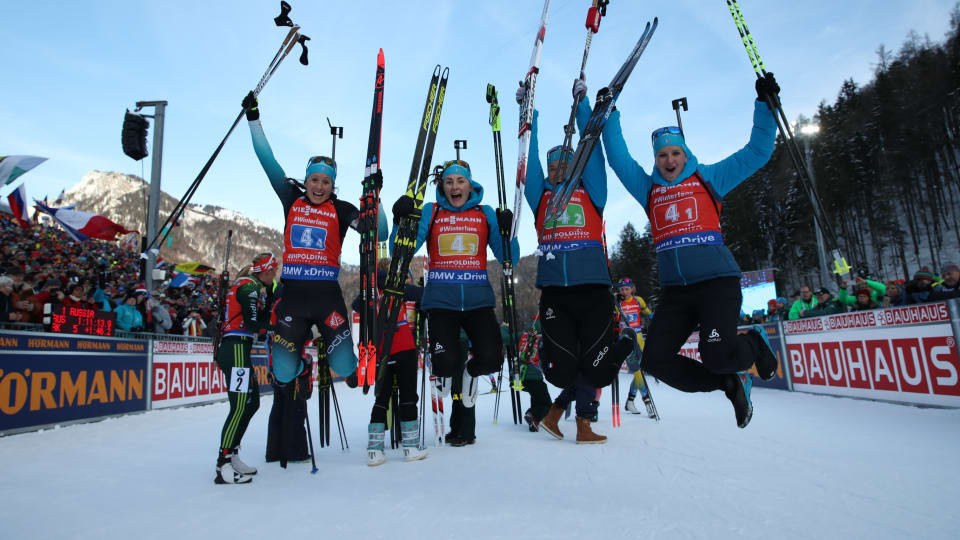 France enjoyed a memorable day of competition at the International Biathlon Union World Cup in Ruhpolding in Germany as its women won the 4x6 kilometres relay title for the first time in 25 years.

Slovakia’s anchor leg athlete Anastasiya Kuzmina produced a superb performance to bring her team from 16th at the last exchange to sixth place, 1:57.6 back.

The 22 teams involved got underway in perfect conditions of sunshine, blue skies and no wind.

Italy, France and Norway dominated the first leg, with all three teams going 10-for-10.

France’s Simon actually shot a bit faster than Dorothea Wierer in standing but the two athletes left together with Norway four seconds back.

Every reason to celebrate -- Julia Simon, @BescondAnais, Justine Braisaz and Anais Chevalier performed incredibly well at the range to secure @FedFranceSki the win in the #RUH19 women's relay. 🇫🇷

By the exchange, Wierer tagged Federica Sanfilippo three seconds ahead of Simon, with Norway’s Synnøve Solemdal fading to 14 seconds back.

France’s veteran performer, Bescond, handed over a 20 seconds advantage to Braisaz who, despite struggling on the final 2km loop, still gave Chevalier a 14-seconds lead for the final leg.

Meanwhile an inspired leg from Tiril Echhoff had lifted Norway to second place ahead of the hosts as Italy dropped out of the running with two penalties.

The French athlete kept her nerve to maintain the team’s pre-eminence, while behind her Norway’s Marte Roeiseland and Denise Hermann of Germany secured silver and bronze.

Tomorrow will see the World Cup concluding with the men’s and women’s mass start competitions over 15km and 12.5km respectively.