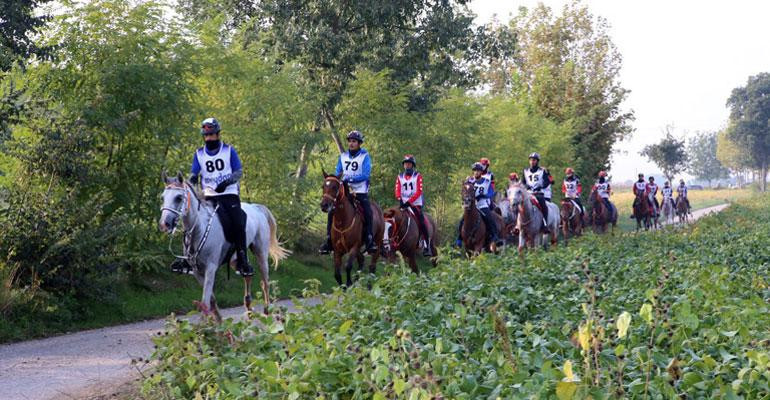 The International Equestrian Federation (FEI) Endurance Temporary Committee held its second in-person meeting at FEI headquarters in Lausanne as it continues working on its remit of carrying out an in-depth review of the discipline's rules.

The Temporary Committee, which was established by the FEI Board in October of last year, has been tasked with bringing the sport back to its original roots of endurance riding rather than endurance racing.

FEI President Ingmar De Vos opened the meeting and commended the Temporary Committee members on their dedication, both to the discipline and to the task in hand.

"It was extremely productive and, with the combination of the hugely experienced individuals on the Committee and the input from the community, I feel we have already made and will continue to make strides towards our goal of improving horse welfare in endurance."

The Temporary Committee had its first meeting last month and has already received Board approval for a change to the endurance rules.

This will introduce the concept of severe injury, with the same sanctions as a catastrophic injury which requires euthanasia.

It is claimed this has been extremely well received throughout the endurance community, from which the Temporary Committee has continued to receive a vast amount of feedback, and will be implemented from February 1.

A proposal to test a reduction in maximum heart rates and presentation times at endurance events held between February 1 and April 1 has been met with mixed reactions from Organising Committees and National Federations hosting competitions during the two-month period.

Participating organisers would be asked to implement heart rates of 64 beats per minute for the first vet gate and 60 beats per minute thereafter, including the final inspection, within 20 minutes.

FEI vice-president Mark Samuel of Canada also attends the meetings to facilitate communications between the Temporary Committee and the FEI Board.

The Temporary Committee is due to hold its next in-person meeting on February 22, following a full day of previously scheduled stakeholder consultations.

There will also be a dedicated endurance session at the 2019 FEI Sports Forum on April 15 and 16, when delegates will be provided with an update by the Temporary Committee as part of the full consultation process prior to voting on proposed rules amendments at the FEI General Assembly in November.

Separately, the FEI has this week sent out a reminder to endurance trainers that significant changes to the FEI Equine Anti-Doping and Controlled Medication Rules came into force on January 1.

Under the new rules, an automatic provisional suspension will be imposed on the registered trainer of any horse that tests positive for a banned substance or two or more controlled medication substances.

During the provisional suspension, trainers would not be able to train or enter horses under their direct or indirect care for either national or international endurance events.

The Temporary Committee was set up following the cancellation of the endurance riding event amid confusing circumstances at this year’s World Equestrian Games (WEG) in Tryon in the US.

The FEI announced that Spain’s Ignasi Casas Vaque had been provisionally relieved of his duties as deputy chair and member of the Endurance Committee pending legal proceedings for alleged incorrect behaviour at the WEG.

It also confirmed that it had received and accepted the resignation of Dr Brian Sheahan of Australia as chair of the Endurance Committee due to ill health.

In an FEI release, De Vos criticised the "win at all costs" mentality that has emerged in endurance racing, adding: "We need to bring the discipline back to the principles of the FEI where welfare of the horse and horsemanship prevail."

Competition in Tryon saw athletes misdirected at the start of the endurance ride and FEI officials had to halt the action after the first loop.

The event was re-started as a 120 kilometres competition, with officials claiming it was the only "pragmatic solution" as there was no possibility to re-schedule the event for the next day.