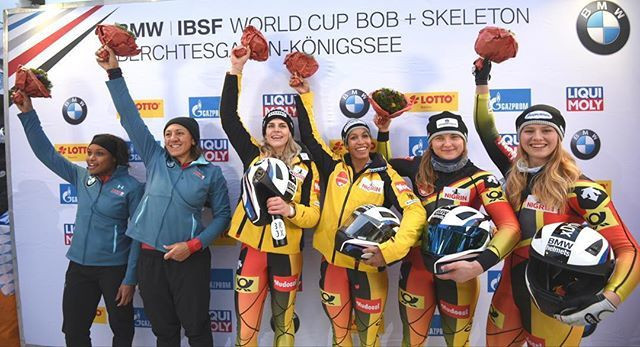 Germany’s Mariiama Jamanka and Annika Drazek have won the two-women bobsleigh title at the International Bobsleigh and Skeleton Federation World Cup event in Königssee, which also doubles as the European Championships.

Together with her pusher, Olympic champion Jamanka sealed her second European title with a total time of 1min 41.70sec after two runs.

World Cup silver went to the US team of Elana Meyers Taylor and Lake Kwaza in a time of 1:41.70, but ineligible for the European silver, that instead went to another German pair in Stephanie Schneider, winner of the European title last year, and Ann-Christin Strack.

The European bronze medal then went to Austria’s Katrin Beierl and Jennifer Onasanya, who finished with a combined time of 1:42.69.

"What an awesome feeling," Jamanka said.

"Anni [Drazek] won last year too, just not with me as pilot.

"Königssee was the track I competed on the first few times.

"I had my very first race here and took part in my first World Cup.

"This is my first World Cup victory here."

Germany also took the win in the men’s two-man bobsleigh through Francesco Friedrich and Martin Grothkopp.

Friedrich , winner of an Olympic gold medal at Pyeongchang 2018 in a tie with Canada’s Justin Kripps and Alexander Kopacz, teamed up with Grothkopp to beat Kripps outright this time around.

The Germans took both the World Cup and European Championship win with a combined time of 1:39.01, while Cripps, racing with Stones Cameron, finished second in 1:39.12.

Whilst they took the World Cup silver medal as a consequence, European silver instead went to another German pair in Johannes Lochner and Christian Rasp, who over two runs set a time of 1:39.44.

The event is due to end tomorrow with the men's four-man bobsleigh competition.