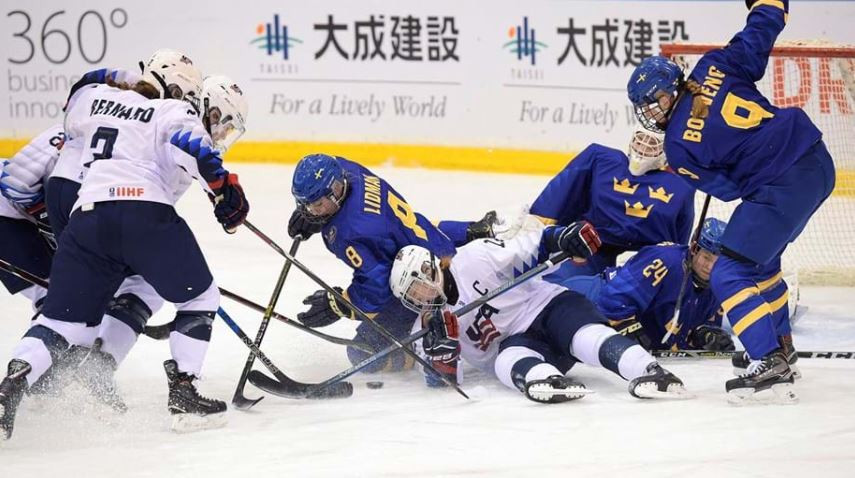 Defending champions the United States and Canada have both advanced to the semi-finals of the International Ice Hockey Federation Under-18 Women's World Championship, by finishing first and second respectively in Group A.

The US sealed their place as group winners with a tight 2-0 win over Sweden at the Obihiro Arena, while Canada secured second with a comfortable 5-1 victory over Russia.

Lacey Eden scored the opening goal for the US, while Katy Knoll got the second from just inches out, after an initial shot was only half saved.

"I think it was a bit harder to get going, but once we got going we had the mentality that we want to play strong and win," Eden said.

"We really picked it up in the third period and we'll be ready for the semi-finals."

Though they lost, it was Sweden who had the first great chance to take the lead, as a five-on-three developed early in the second period, which led to a couple of attempts on goal.

Thea Johansson hit the post on one, while the other from Lina Ljungholm was expertly saved.

Their loss means Sweden drop into the quarter-finals, where they will face Finland for a spot in the semis.

Canada had a much easier time of it against Russia.

Three quick goals within 84 seconds in the first period put them on track for a strong win, with Russia only managing 11 shots in the match.

Alexie Guay got the first goal for Canada, before Ann Cherkowski made to 2-0 36 seconds later.

Another 28 seconds after that it was 3-0 thanks to Grace Shirley.

Teagan Grant made it four before Russia got one back through Yelizaveta Shkalyova, but by that point the result was not in doubt.

The top two in the stronger Group A knew they would advance straight to the last four, with the bottom two playing the top two from Group B for the chance to join them.

In Group B Finland had already secured their quarter-final spot yesterday, but a 2-1 win over the Czech Republic today ensured they finish finish top and so will now face Sweden.

With the Czechs pushing for a winner of their own to avoid a relegation fight, Kiira Yrjanen was able to score into an empty net to seal the win for Finland, after Elisa Holopainen had got their first.

In the day's other game Switzerland beat hosts Japan by the same scoreline to gain the final quarter-final spot, where they will play Russia.

Their goals came from Alicia Pagnameta and Emma Ingold.

The quarter final matches and the first of the relegation battles between the Czech Republic and Japan will now take place tomorrow, before the semi-finals go ahead on Saturday (January 12).