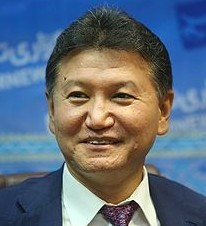 The International Chess Federation (FIDE) have announced they reached a settlement agreement with their former President Kirsan Ilyumzhinov following his suspension from office.

The 56-year-old Russian businessman, who had been President of FIDE since 1995, was removed from his position after having been placed on the United States Treasury Department sanctions list for allegedly providing financial assistance to Syria.

Ilyumzhinov was first placed on the sanctions list in 2015 and in March 2017, a statement appeared on FIDE’s website claiming Ilyumzhinov had resigned.

Ilyumzhinov denied that, however, before a FIDE Executive Board meeting in October voted unanimously to keep Deputy President Georgios Makropoulos in charge instead.

Makrpoulos has since lost a Presidential election to another Russian, Arkady Dvorkovich.

Now, in a statement FIDE say they are "happy to announce" that a settlement agreement, approved by the Court of Arbitration for Sport (CAS), has been reached.

"On 27 November 2018, the parties reached an amicable settlement of their dispute," the statement read.

The FIDE statement added: "Furthermore, the idea of the settlement was also approved by the FIDE Presidential Board."

As part of the settlement FIDE say they have agreed to reduce Ilyumzhinov’s temporary suspension, though "all other aspects of the FIDE Ethics Commission’s decision in the case remain unaffected".

"FIDE would like to emphasise that this Settlement Agreement constitutes the full and final settlement of the dispute between FIDE and Kirsan Ilyumzhinov relating to the FIDE Ethics Commission’s decision in the case no 2-2018," they said.

"Furthermore, Kirsan Ilyumzhinov confirms that he does not have any claims against FIDE not only in connection with the present dispute, but also in the framework of his entire relationship with FIDE."

"Makropoulos mentioned that Ilyumzhinov is abusing the name of Russia and the President of Russia Vladimir Putin, in order to hide himself and excuse his team’s insults and threats to FIDE officers," a statement on FIDE’s website read.

"Makropoulos said that Ilyumzhinov should stop doing this."

In October of this year Makropoulos lost a Presidential vote to Dvorkovich by 103 votes to 75.