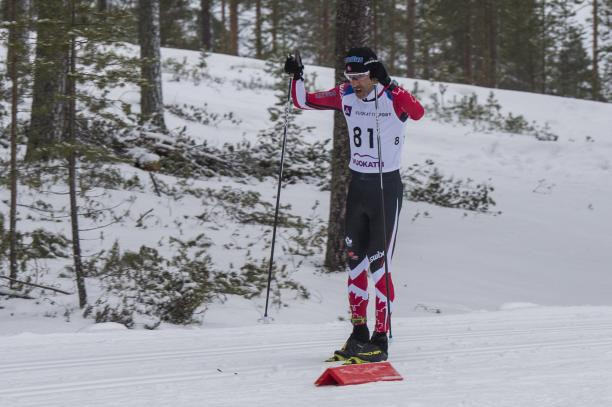 Canada’s Brian McKeever maintained his unbeaten run in the vision impaired cross-country short race on the second day of competition at the World Para Nordic Skiing World Cup in Vuokatti in Finland.

The 13-times Paralympic champion had his revenge over Sweden’s Zebastian Modin, who beat him to the gold medal in yesterday’s middle distance cross-country.

Modin and guide Jerry Ahrlin had to settle for second after their opening day win, while Ukraine’s Oleksandr Kazik and guide Sergiy Kucheryaviy took the bronze.

McKeever – who along with guide Graham Nishikawa has never lost a five kilometres race - is satisfied with his World Cup so far.

"For this time of year I think the form is okay," he said.

"It's hard to judge with jet lag but it's getting better each day which I think that is important.

"Today was a more clear idea of what we've been doing so I'm happy with that."

The tables were also turned in the women's vision impaired race, where Ukraine's Oksana Shyshkova and guide Vitaliy Kazakov beat their victors of the day before, Austrian Carina Edlinger and her new guide Florian Seiwald.

Norway’s Vilde Nilsen made it two wins in two days as she came home first in the women's standing short race having won yesterday’s 7.5km version.

"It feels very good - I am very happy about the first place," said Nilsen.

"Yesterday I was almost shocked by the win.

"This morning I felt very nervous because I knew I was the leader in the World Cup so I wanted to stay in the same position and I did it today and I am very happy with that."

Nilsen’s compatriot Birgit Skarstein and Daniel Cnossen of the United States continued to dominate in the sitting races.

Cnossen came home 13 seconds ahead of Brazilian youngster Cristian Ribera, who added a silver medal to his bronze from the 7.5km.

"I was feeling a little tired [this morning] because we haven't been doing a lot of racing yet," said Cnossen.

"To do race after race like we do at the World Cup it takes some conditioning so I'm looking forward to the rest day and the start of the biathlon races on Sunday."

Skarstein came home ahead of Kendall Gretsch of the US and Germany's Andrea Eskau to secure her second win on consecutive days.

"I didn't think that would be possible but it was a dream and it actually came true today and that's really, really cool," said Skarstein.

She will seek to complete the treble in the cross-country sprint on Sunday.

"That's going to be an exciting day," she added.

"Sprint is sprint so everything can happen."

In the men's standing France's double Paralympic biathlon champion Benjamin Daviet started his first race of the season and took the win by six seconds.

Tomorrow is a rest day for athletes before the action is due to resume on Saturday (December 15) with the first biathlon races of the season.