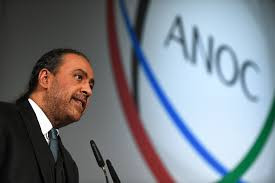 Sheikh Ahmad Al-Fahad Al-Sabah will officially stand down as President of the Association of National Olympic Committees (ANOC) on the first day of the General Assembly here on Wednesday (November 28) following allegations of forgery, it has been officially confirmed.

Sheikh Ahmad informed the International Olympic Committee (IOC) of his decision to temporarily step aside in a letter to its chief ethics and compliance officer Pâquerette Girard Zappelli.

He will announce it to the ANOC membership during the first day of the meeting and the planned election will be postponed.

Fiji's Robin Mitchell, set to be elected as ANOC first vice-president at the General Assembly, will assume leadership of the organisation on a temporary basis.

insidethegames had exclusively revealed yesterday that the Kuwaiti powerbroker would stand down pending the outcome of an ongoing IOC Ethics Commission investigation.

In a statement following an emergency IOC Executive Board meeting held by teleconference today, the IOC announced that they had taken note of Sheikh Ahmad's decision to "temporarily suspend himself from his role and responsibilities" with ANOC.

IOC President Thomas Bach had personally asked Sheikh Ahmad, a key figure in the German's election in 2013, to do so after he was revealed as one of five people accused of creating fake videos to prove two Kuwaiti Government officials were guilty of coup-plotting and corruption.

The IOC Ethics Commission decision on Sheikh Ahmad, who denies wrongdoing, claims the fact that he is "considered by a judicial authority as having violated a criminal law constitutes a very serious damage to the Olympic Movement and the IOC’s reputation".

The Ethics Commission claimed Sheikh Ahmad stepping aside from his roles as an IOC member and head of the Olympic Solidarity Commission was an "appropriate measure".

The Commission also warned that IOC members would not have been able to participate in the meetings scheduled here this week if the 55-year-old remained ANOC President, a position he has held since April 2012.

Sheikh Ahmad, still President of the Olympic Council of Asia and one of the IOC's longest-serving members having joined in 1992, has been asked to present his case to the Ethics Commission at its next meeting in Lausanne on January 11.

"The presumption of innocence prevails and recognises that Sheikh Ahmad Al-Fahad Al-Sabah has taken the correct course of action with regard to the Olympic Movement," the IOC Executive Board said in a statement.

The IOC Ethics Commission did not reference the ongoing probe into Sheikh Ahmad after he was identified in a United States Department of Justice document in April in a case involving Guam's Richard Lai.

The allegations come after a report today in French investigative publication Mediapart and German magazine Der Spiegel, which claimed Sheikh Ahmad was the victim of a covert campaign allegedly conducted by the Qatar-based International Centre for Sport Security (ICSS) to increase the country's standing within the Olympic Movement at his expense.

The accusations were denied by the ICSS.

"ANOC can confirm that Sheikh Ahmad Al-Fahad Al-Sabah has decided to temporarily suspend himself from his roles and responsibilities within ANOC on 28 November 2018, pending the legal hearings in Switzerland," ANOC said in a statement.

"Sheikh Ahmad has full trust in the Swiss legal system and is confident that he will be able to clarify his position in full before the competent Swiss Courts.

"ANOC notes Sheikh Ahmad has taken the decision based on what he believes to be in the best interests of the NOC family and Olympic Movement.

"It is important to reiterate that Sheikh Ahmad strenuously denies any wrongdoing in this legal case which he states is politically and maliciously motivated."