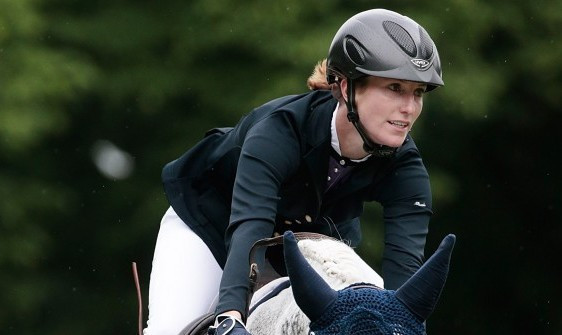 Blum became the first woman in 28 years of the FEI World Equestrian Games to win individual gold at the competition in Tyron this year.

She also won a team bronze at the same event.

"I am very proud to be the Fosun best athlete, I think it’s a dream of every rider," Blum said.

"A lot of really good riders got it before and to the people I want to say thank you a lot, it was a pleasure for me and I have the best fans and supporters."

Lee McKeever of the United States was awarded FEI Best Groom for his dedication to working with four-time Olympian McLain Ward.

The Rising Star Award went to French athlete Victor Levecque, who, at 20, has already won 10 European medals, including two gold.

“Thank you Alice, my team & my supporters” Simone Blum finishing off an incredible year as the Fosun Best Athlete#FEIAwards2018 pic.twitter.com/AxNV8CjWsg

China's Alex Hua Tian and Philip Wong won the FEI Solidarity award for the Horsemanship charity programme, and Leila Malki from Palestine was given the Against All Odds award for her work in encouraging girls and women to become involved in equestrian sport in her country.

The winners were decided by public vote and a panel of judges, with equal bearing on their decisions.

"For a second consecutive year the online public vote has become very popular and a peer to peer recognition is one of the most powerful," he said.

"The influence of one's peers and the recognition of talent and hard work is a testament to the strengths and development of the growth of the sport.

"Development, like youth, is key to our future and has been a strong focus throughout 2018 as we can see here tonight in the results of the youth of our sport shining through."