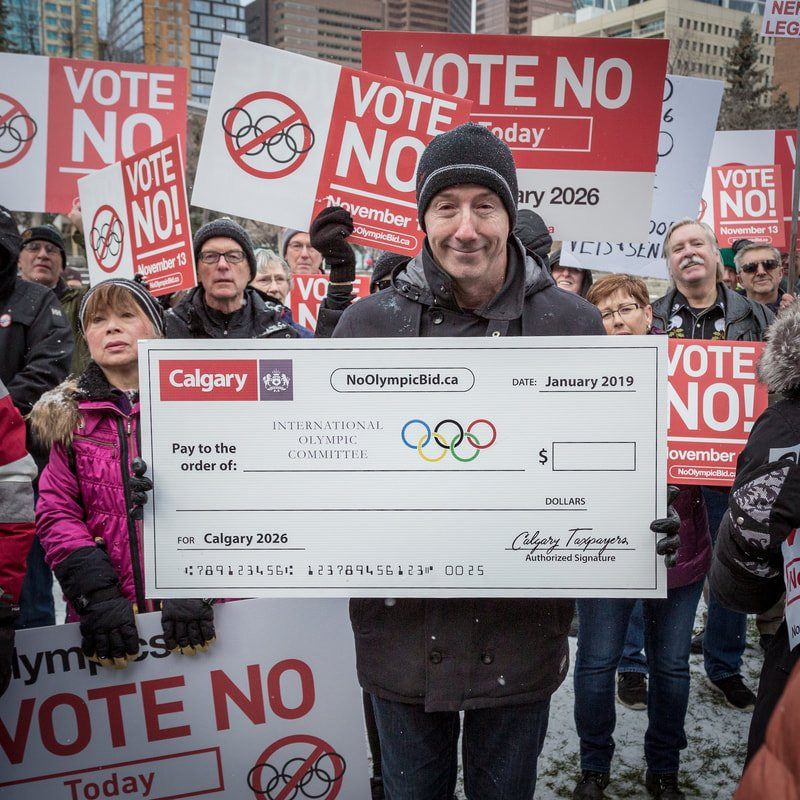 Calgary is set to become the latest city to withdraw from the race for the 2026 Winter Olympic and Paralympic Games after the city's residents voted against the bid in a plebiscite today.

The defeat deals another huge blow to the International Olympic Committee (IOC) and leaves just two candidates, Stockholm in Sweden and Milan-Cortina d'Ampezzo, in the running to stage the 2026 Games.

According to unofficial results published by the City of Calgary, 56.4 per cent voted no, with 43.6 in favour.

Over 304,000 votes were cast in the plebiscite, representing a larger turnout than both sides were expecting.

The result of the plebiscite, which sees Calgary join a host of other cities in losing a public vote on an Olympic bid, is non-binding but the city's Mayor had admitted defeat would mark the end of the candidacy.

Thank you #yyc for making your voices heard. re #Calgary206 . As Calgarians, we share the same values and goals. This results allows us to continue to build a vibrant and robust future for Calgary. We can work together to set our priorities that meet our collective needs.

"I truly believe this was the best opportunity to unite our community around a new vision of hope, confidence and realise an extended legacy, inspired by the world’s best winter athletes," Calgary 2026 chief executive Mary Moran said.

"Mostly though, it was about Calgary doing what we do best and that is pull together to achieve big dreams.

"So the key now is to take what we learned and keep asking that question: what is our next big dream, the next big project that will inspire us?"

In a statement, the Canadian Olympic Committee said it was "disappointed" with the outcome of the vote.

"The opportunity to welcome the world to Canada, where people can experience the uniting power of the Games and within our nation’s culture of peace and inclusion, would have offered countless benefits to all," the statement read.

Both the yes and no campaigns held rallies this week prior to the plebiscite in an effort to sway voters to their side.

The result sees Calgary become the ninth straight Olympic bid city to lose a referendum, with the last success for the IOC coming in Oslo in 2012, although the bid from the Norwegian capital eventually collapsed anyway.

It came despite the IOC launching a concerted campaign to persuade Calgary to stay in the fledgling race, which now includes just two candidate.

IOC officials have visited Calgary on several occasions in recent months, holding open discussions with city and Province officials and taking questions from residents in the city.

One of the major concerns raised by voters in the Calgary, hosts of the 1988 Winter Olympics, was over costs and a supposed lack of transparency from the Bid Committee in revealing key details.

Regardless of where you stand, we should be grateful for all these incredible ambassadors and their love for Calgary! pic.twitter.com/WCMiRQCQtM

The bid proceeded to a plebiscite after it narrowly survived a City Council vote last month, despite a recommendation from the the city's Olympic and Paralympic Winter Games Assessment Committee to end it.

The recommendation was made following the lack of a funding agreement between the city and the Federal and Provincial Governments, but an 11th-hour deal was then struck.

Councillors still voted 8-7 in favour of approving the recommendation but this fell short of the 10 votes required for the motion to pass.

"For the past eight months, we engaged with Calgarians and heard a broad range of concerns and considerations, from a wide range of people in all parts of the city, and outside of the city," No Calgary Olympics said in a statement.

"We are pleased that Calgarians recognise that hosting the Olympics is one path but not the only path towards building on all of our community’s strengths and opportunity."