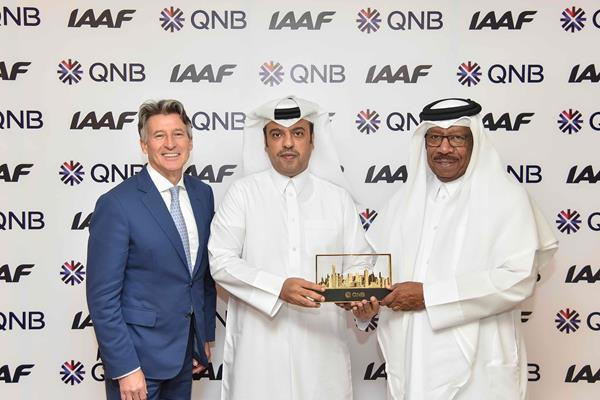 Qatar National Bank (QNB), the largest financial institution in the Middle East and Africa, has officially come on board as an official partner of the International Association of Athletics Federations (IAAF) after a four-year deal was signed in Doha.

The partnership will begin from January 1, 2019 and continue to the end of 2022 with the bank supporting all World Athletic Series events in that period.

The official signing follows the July announcement that QNB were to join with the IAAF.

QNB will sponsor the next two IAAF World Championships in Doha in 2019 and Eugene, Oregon in 2021, as well as the IAAF World Relays in Yokohama, Japan next year.

"It is always exciting to be signing new partnerships and taking the sport of athletics to new organisations, their customers and stakeholders," said Coe.

"This partnership, in particular, is rewarding as QNB is the largest financial institution in the Middle East and Africa with a global presence and a strong vision for growth across the region as well as a stated desire to promote and encourage the health and wellbeing of communities in which it operates.

"New partners also bring new ideas and new thinking and we look forward to the contribution and involvement of QNB in our sport.

"We are already talking to them about their financial security expertise, their strong culture of customer service and their commitment to youth, education and sustainability.

"There are many aspects to their business that will help to enhance and promote athletics across the region and the world."

The partnership also grants QNB the exclusive branding rights on all female athlete bibs at the World Championships in Doha, Qatar's capital, next year.