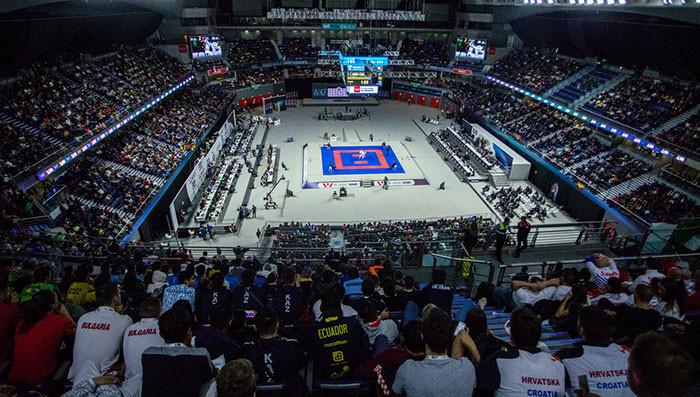 The International Olympic Committee (IOC) has urged International Federations (IFs) not to award major events to Spain unless the Government provides guarantees that Kosovo can compete without discrimination after the nation were banned from participating under their own flag at the Karate World Championships here.

IOC deputy director general Pere Miró told insidethegames the organisation would warn IFs they should avoid hosting international sporting competitions in Spain if the Government maintains its stance on Kosovo.

It marks the first direct warning from the IOC against Spain, which has so far proved unwilling to recognise Kosovo.

"If the Spanish Government are not in the conditions to guarantee the access not only to Kosovo but to every athlete to compete, we should warn all IFs that, until this is solved, they should not hold international competitions there," said Miro.

Miro, the IOC's director for National Olympic Committee (NOC) relations, claimed a deal which saw Kosovo compete here bearing the initials of their federation - the KKF - was "acceptable" but equally "did not go far enough".

Kosovan athletes wore uniform with "KKF" on the back - but were still displayed on scoreboards and on screens inside the arena as "World Karate Federation (WKF) 5".

Miro, who is from Spain, said this was similar to the agreement reached for the terms of Kosovo's participation at the Mediterranean Games in Tarragona earlier this year.

Athletes from the nation, which became a full member of the IOC in 2014, took part at the Games as the National Olympic Committee of Kosovo.

Although their flag was prohibited from the Opening Ceremony - as it was during the Karate World Championships here - Miro claimed the IOC had hoped the Mediterranean Games decision would set a precedent.

Miro added that he shared the position of WKF President Antonio Espinós, who told insidethegames they would have to "seriously consider the possibility of not coming to Spain" if the situation is not resolved.

He dismissed suggestions the IOC had failed to act swiftly enough on the issue, even though it was clear Kosovo would encounter problems at these Championships owing to the Government's continued refusal to recognise its independence.

"We cannot suspend a country and we cannot say they cannot organise events there," Miro told insidethegames.

"But we are totally ready to say that and this is what we will say now - IFs, please before awarding any competition, make sure you have all the guarantees that all athletes will be welcome in Spain.

"We need to be totally clear with the Federations and say, look, this is the situation and please pay attention to that."

On the situation regarding the Karate World Championships, Miro added: "I understand the frustration but at the end the agreement they obtained was not so far away [from Tarragona].

"The name accepted by the Government at the Mediterranean Games was the NOC of Kosovo, and in this case it is KKF.

"We could have gone a little bit further and made a better solution than this one."

The IOC had previously refused to condemn the decision from the Spanish Government, despite President Thomas Bach calling on sport to "show its teeth" by taking action to combat cases of countries restricting the way other nations participate at competitions on political grounds.

The IOC earlier this year told IFs to "carefully consider" awarding events to Serbia and Kosovo amid the severity of the political tension between the two countries.

It came after Kosovo were twice barred from entering Serbia to compete at the European Karate Championships in Novi Sad in May.