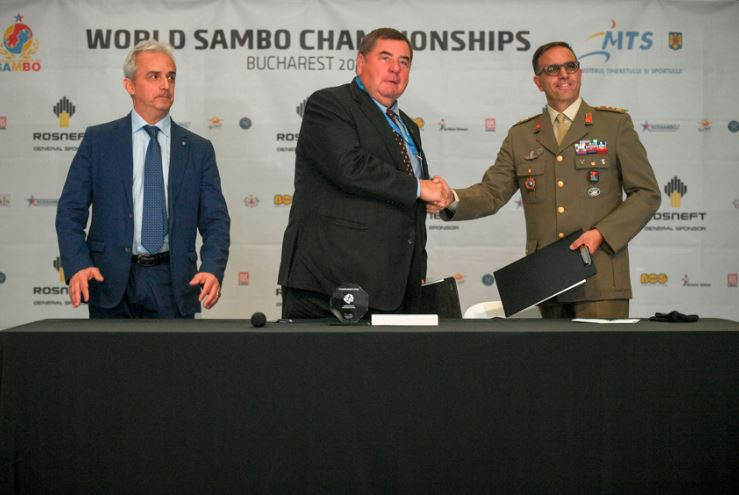 The International Sambo Federation (FIAS) has signed a Memorandum of Understanding with the International Council of Military Sports (CISM) here at the 2018 World Championships in Bucharest.

The agreement was signed by FIAS President Vasily Shestakov and Lieutenant Colonel Walter Borginho, the President of CISM's Sports Commission, beneath the big screen here at the Sala Polivalenta Bucharest Sports Hall.

It will see the two organisations work together to further promote the sport.

"I am very honoured today as President of the Sport Commission of the International Council of Military Sports to sign this important agreement," Lieutenant Colonel Borginho said.

"I take the opportunity to congratulate sambo for its 80th anniversary.

"CISM is one of the largest sport organisations in the world and under the model of friendship through sport we organise sports events in more than 25 sports.

"We strongly hope that from today sambo will be one of our sports."

"For sambo, of course it's another step forward," he said.

"Sambo and the military are quite close because sambo and sambo techniques are actually used in different countries and their military.

"So, we think it's a good reunion for both our organisations and we are very happy."

Sambo is intrinsically linked with the military, having been formed in the Soviet Union's Red Army during the 1920s to improve hand-to-hand combat skills.

Baring that in mind, Shestakov also called the agreement "symbolic".

"At the time when sambo was created, one of the heads of the army at that time decided to include sambo as special training for the army," he said.

"So this is really significant for us to become part of the International Council of Military Sports."