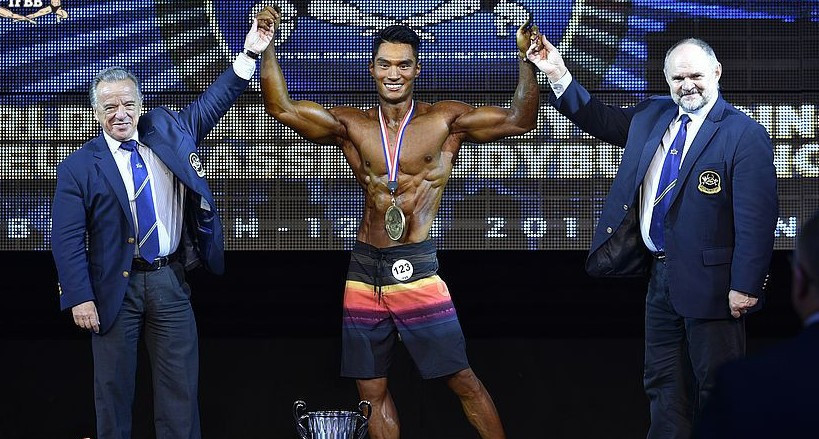 Men's physique was first officially included in the World Championship programme last year, and has proved so popular that the Men's Physique World Cup event has now been introduced.

The physique discipline has less focus on the muscle mass of athletes, with judges also looking at the shape and symmetry of the participants.

Stage presence and personality also play a part in the judges' verdict.

An obvious difference to bodybuilding is that the competitors wear brightly coloured board shorts instead of posing trunks.

Today's athletes competed in seven categories, with Walter Valencia of Ecuador winning the 170cm final to receive the first World Cup gold medal to be awarded.

Jordan's Deya Lutfi won the 173cm category, while Spain's Enrique Gutierrez was victorious in the 176cm final and Liu Maoyi of China grabbed gold in the 179cm final.

The winner of the 182cm category was Pierre Murcia of France and Arman Harsini of Iran received the gold medal in the +182cm final.

Liu was then named the overall winner of the categories, making him the first champion of the Men's Physique World Cup.

The Championships also featured classic physique categories for the first time, with the IFBB only approving it as an official discipline in June this year.

Slovakia's Peter Tatarka was named as the official winner for this.