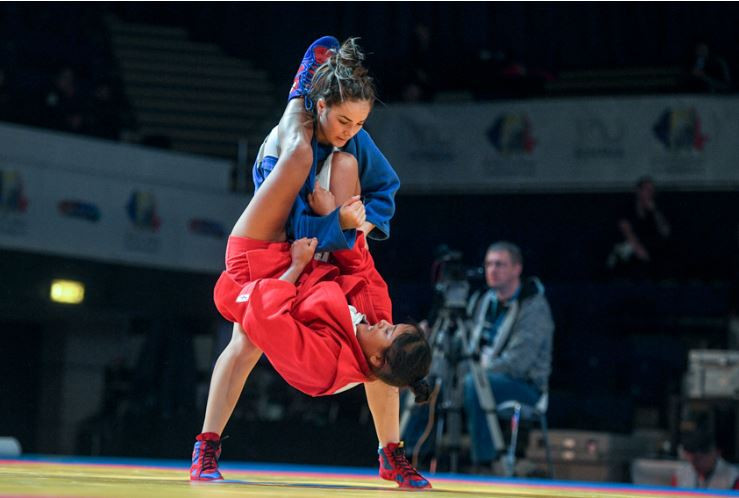 Russia won five more golds today at the International Sambo Federation World Championships here in Bucharest, during an action-packed session which saw one Ukrainian sambist propose to his girlfriend.

The proposal came at the end of the third final of the night in the men's 62 kilogram sport sambo division between Russia's Kamil Adbulazizov and Ukraine's Andrii Kucherenko.

It was the Russian that took the gold at the Sala Polivalenta Bucharest Sports Hall, 3-0, but as he left the mat, Kucherenko ushered his girlfriend up to join him and promptly got down on one knee.

Whilst the Ukrainian had to settle for silver in the final, you could forgive him for not caring as he left the mat, after his girlfriend said yes while in tears of delight.

The bronze medals in the division were won by Sorbon Latifov from Tajikistan and Kerimberdi Dovletov from Turkmenistan.

The first gold of the night was also won by Russia, after a strong leg hold by Diana Ryabova forced her Belarus opponent Maryna Zharskaya to submit in the women's 52kg final.

In that division the bronze medals were claimed by Paulina Esanu from Moldova and Kazakhstan's Gulnur Yerbolova.

Russia undoubtedly remain the dominant force in sambo, finishing the session on 10 golds, comfortably ahead of Ukraine in second who have two, but it did not all go Russia's way tonight.

In the 82kg combat sambo final Dmitry Samoylov became the first Russian at the Championships to reach a gold medal match and lose.

He fell to an agonising 1-0 defeat to Kazakhstan’s Temirlan Khsangaliev, who almost seemed in disbelief when the bell rang to signify the end of the bout.

Once he came to his senses, though, Khsangaliev celebrated by running around the mat with his arms in the air, while the bronze medals in that event were claimed by Taegeun Kim, who won South Korea’s first medal of the event, and Javlanbek Madaminov from Turkmenistan.

Immediately following that bout, Belarus claimed their second gold of the Championships when Sviatlana Tsimashenka came from behind to beat Bulgaria’s Mariya Oryashkova in the women’s 80kg final.

With less than a minute left the Belorussian trailed 1-0, but a strong takedown with time running out switched the score in her favour and saw her seal the gold at 2-1.

The bronze medals were won by Mongolia's Sainbuyan Bataa and Ukraine's Halyna Kovalska.

Tomorrow the Championships are set to come to an end with nine more finals taking place from 4pm local time.

They will be followed by a short Closing Ceremony at 6pm.