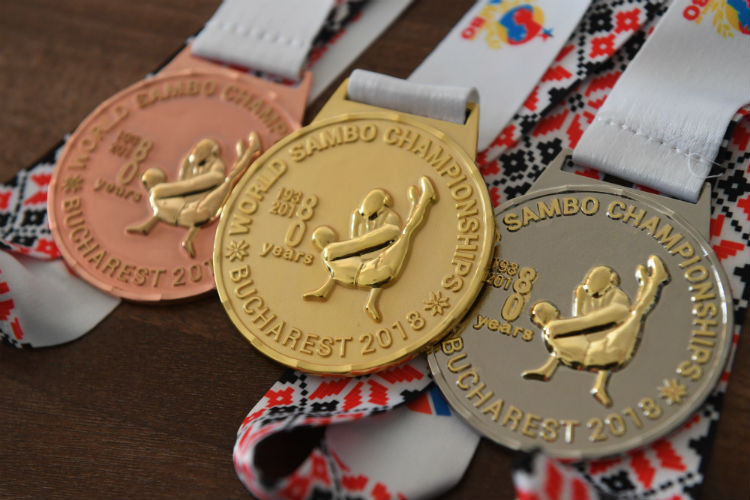 Russia got off to a flying start at the 2018 World Sambo Championships here in Bucharest, winning five of the nine gold medals on offer on day one as well as three bronze.

On an evening that also featured the Opening Ceremony of the event, Russia won the first four finals in a row to take an immediate and significant lead in the medal table, but Ukraine also won twice at the Sala Polivalenta Sports Hall.

The night ended with a firework display outside the arena to celebrate what is the sport's 80th anniversary.

The first gold and world title was won by Russia's Mariia Molchanova, who beat Uzbekistan's Nodira Gulova by submission in the women's 48 kilograms sport sambo division.

The bronze medals were claimed by Mongolia's Narantsetseg Ganbaatar and Romania's Mihaela Daniela Chiss, but neither sambist fought in tonight's session as their medals were decided earlier in the day, as was the case in every category.

Russia claimed their second gold when Andrey Kubarkov beat Armenia's Tigran Kirakosyn in the second final of the night in the men's 52kg sport sambo class.

In a much tighter final, Kubarkov won on points, forcing Kirakosyn to settle for silver.

The bronzes in that event were taken by Givi Nadareishvili from Georgia and another Mongolian, Ardenebaatar Shaaluu, who had come through the repechages to join the podium.

Russia's third gold came from Alexander Nesterov in the men's 57kg combat sambo class, who beat Ukraine's Oleksandr Voropaiev, and then their fourth was claimed by Yana Kostenko in the women's 60kg sport sambo final.

Kostenko beat Ukraine's Anastasyia Shevchenko, while the bronzes in each of those divisions were won by Kazakhstan's Serikzhan Tussupov and Mongolia's Togtokhbayar Nyamkhuu in the men’s event and Sabina Artemciuc from Moldova and Katsiaryna Prakapenka from Belarus in the women's.

While they were clearly the strongest nation, Russia did not totally dominate the session with Ukraine, Kazakhstan and Georgia also picking up golds.

Ukraine won theirs in the men's 74kg and 100kg combat sambo divisions thanks to Vladyslav Rudniev and Anatolii Voloshynov respectively.

They beat Kyrgyzstan's Daiyrbek Karyiaev and Bulgaria's Zlatev Denislav, while the bronze medals in each division were won by Amartuvshin Khuukhenkhuu from Mongolia and Zaur Azizov from Russia at 74kg and Charymyrat Annagurbanov from Turkmenistan and Russia's Mikhail Mokhnatkin at 100kg.

Kazakhstan's gold came in the men's 68kg sport sambo division thanks to Nurbol Serikov, who came from behind to beat Azerbaijan's Emil Hasanov, while Georgia's Nino Odzelashvili won Georgia's by beating Lorena Alexandra Podelenczki from the host country in the women's 72kg division.

Claiming the bronze medals in those events were Aliaksandr Koksha from Belarus and Nikita Kletskov, another Russian, in the men's event.