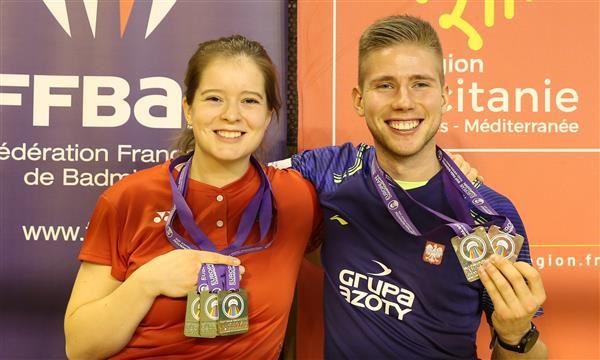 Poland’s Bartlomiej Mroz and Germany’s Valeska Knoblauch both sealed impressive achievements as finals were held today at the European Para-Badminton Championships in Rodez in France.

Mroz won his first continental singles title with a 21-15, 17-21, 21-13 win over Turkey’s İlker Tuzcu in the men’s SU5 final at the Amphitheatre Gymnasium.

He had tried and failed three times before to become European champion, and each time was beaten by Tuzcu.

"I’ve been trying for eight years to win this title and now it is my time," Mroz said.

"And next time we play, I can show him that this is not just a lucky win.

"I’ve been feeling good for weeks.

"I just believed that I will do it and I knew I would be the champion."

Mroz and Tuzcu are also a men’s doubles pairing and successfully defended their SU5 crown with a 21-19, 25-23 victory over home duo Meril Loquette and Lucas Mazur.

The 28-year-old German failed to convert numerous match points in the third game, but re-gained her composure to prevail after 55 minutes.

She has now risen to number three in the world rankings going into next year’s qualifying for Tokyo 2020, where badminton will make its Paralympic Games debut.

"I don’t know what to say - I’m overwhelmed.

"I was so nervous at the end.

"I thought I had lost it when I missed so many match points.

"My hands were shaking when I was trying to serve.

"My coaches helped and I went back to the game plan and won."

It secured him a forth European men’s singles title in a row.

Rooke then paired up with Germany’s Thomas Wandschneider to win the men’s doubles WH1-WH2 final.