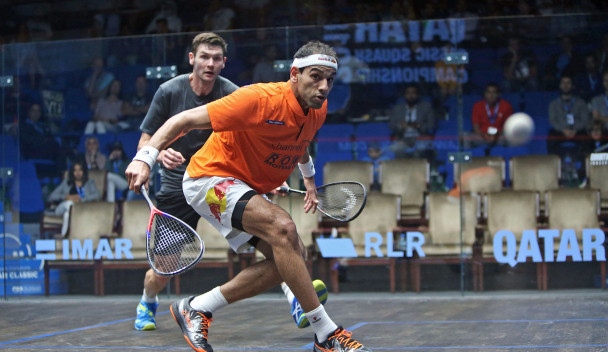 Defending champion Mohamed Elshorbagy continued his march at the Professional Squash Association Qatar Classic by brushing aside England's Adrian Waller in round three.

The Egyptian, the world number one and reigning world champion, was in fine form as he completed an 11-8, 11-5, 11-7 success in a little over half-an-hour.

It means he has booked his place in the quarter finals of the World Tour Platinum event at the Khalifa International Tennis and Squash Complex in Doha.

Waller could not back-up his stunning win in the previous round against Egypt's world number three Omar Mosaad.

"He put me under a lot of pressure throughout the whole match but the most important thing is that you don't let it get to you.

"I feel like I had good preparation for this event - I feel good, physically strong and mentally fresh."

Other round three matches included a win for New Zealand's Paul Coll who advanced after Spain's Borja Golan retired.