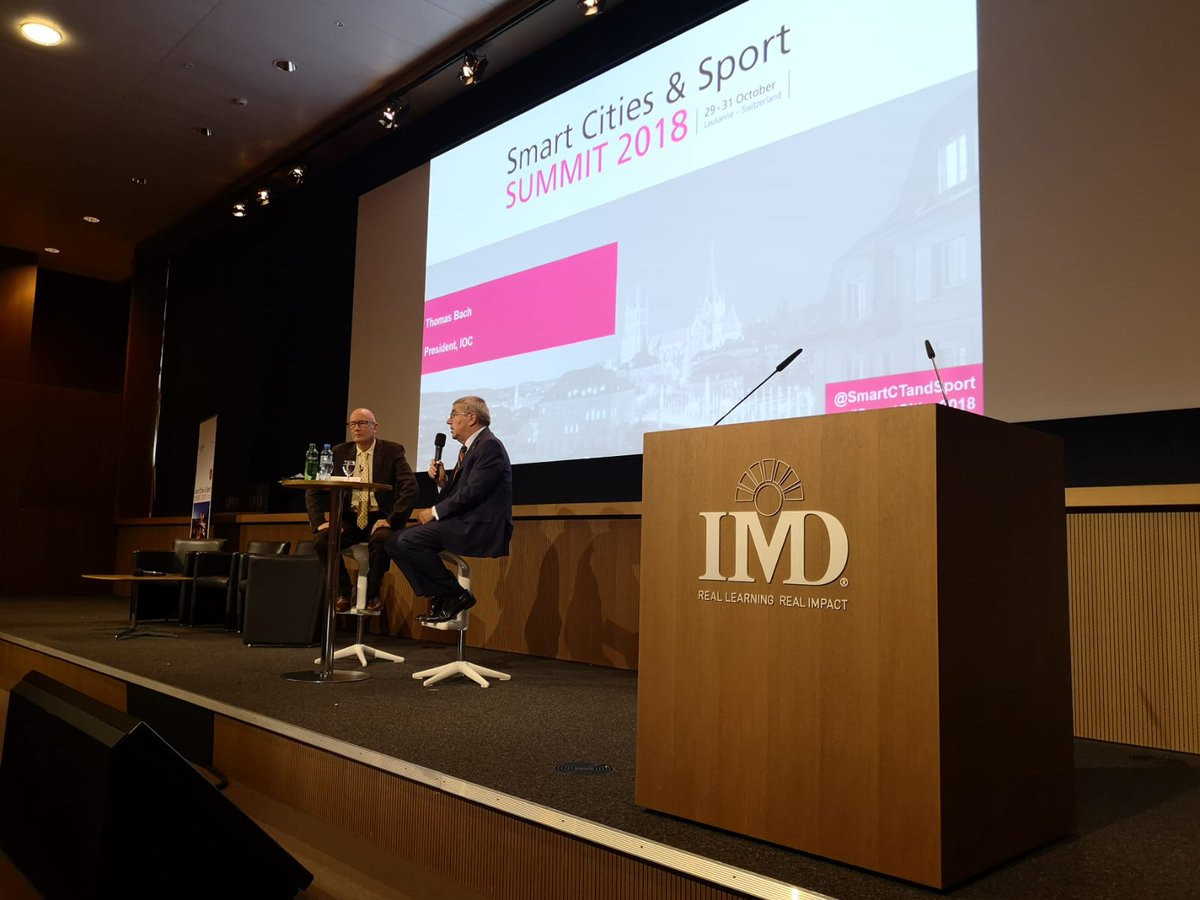 Upcoming Olympic Games will provide proof to the public that the Agenda 2020 and New Norm reforms have reduced the costs involved, Thomas Bach has claimed.

He made the statements during the Smart Cities & Sport Summit here today, where he took part in a session.

Bach was asked by insidethegames whether the IOC faced a "losing battle" in convincing the public that the organisation's reforms were having an impact.

Residents of cities have expressed concerns at the total cost of the Games, rather than the Games' operating budget.

"It is a tough battle, but we cannot give up," Bach said.

"Like with all reforms, people cannot see it, they have to be convinced to believe it.

"The next editions of the Games, that we have elected under the auspices of Agenda 2020, will deliver the proof in the pudding.

"It will then become easier.

"Now people are very much discussing the past, they are in many cases discussing some fantasy figures.

"They are discussing a background that does not really reflect the reality of now.

"It is an uphill battle, but we will continue fighting."

The IOC have consistently referred to the budget of the host cities to insist the Games are a viable option.

This was reflected in the recent announcement that Pyeongchang 2018 has reportedly achieved a surplus of $55 million (£42.1 million/€48 million), although doubts remain over the legacy and cost of the Games venues.

The debate around operating and total costs of the Games has also been shown with the upcoming Olympic Games in Tokyo.

A revised budget of ¥1.35 trillion (£9.1 billion/$12.3 billion/€10.3 billion) was unveiled by Tokyo 2020 last December, with organisers claiming the number represented a significant reduction on previous figures.

The figure represents $2.2 billion (£1.7 billion/€1.9 billion) of savings from the venue master plan, with an additional $2.1 billion (£1.6 billion/€1.8 billion) cut from the operational budget for the Olympic and Paralympic Games.

Despite the figures, concerns had been raised over a recent audit which said the total amount spent on the event by the Central and Local Governments could reach ¥3 trillion (£20 billion/$26.5 billion/€23 billion).

The figures were revealed in a survey by the Board of Audit.

Tokyo 2020 Coordination Commission chair John Coates insisted these were "not Games costs that Tokyo 2020 should be burdened with" as they mainly related to projects not directly connected to the Olympics and Paralympics.

This has been alleged to have included projects such as road construction and improvements to weather detection systems, which have supposedly been approved as an "Olympic" cost.

Both Agenda 2020 and the New Norm are claimed to have provided cities with more flexibility when putting together a bid plan for the Games.

It is claimed this will ultimately lead to better legacies and less costly Games.

Bach suggested the reforms have been understood by "opinion leaders", such as politicians, but he admitted more work needed to be done to communicate their reforms to the general public.

The dinner was reportedly aimed at Coates talking up the chances of Brisbane bidding in 2032.

A feasibility study is currently underway to assess a potential bid, which would likely encompass venues across Queensland.

The results of this are not due to be released until next year.

Bach claimed the interest of Brisbane and other cities and countries showed that regions had understood and believed in the IOC's reform process.

"We see what you would have called, 10 to 15 years ago, opinion leaders, that these people understand very well," he said.

"This is why for the Olympic Games 2032, we have already now a big number of interested cities and countries, with many regions undertaking feasibility studies.

"Yesterday I had a dinner when I was told of the interest from Australia, from Brisbane, for 2032.

"We have a bigger number, I could give you a whole series of candidates.

"The authorities, who used to be the opinion leaders, they understand and realise.

"We are in the change of the building of public opinion.

"Before if you have the municipal council and Mayor saying we want to have the Olympics, then the Federal Government would support this and the Chamber of Commerce would approve.

"Fifteen years ago this was a done deal.

"Now you have the Mayor, opposition, the Federal Government, sport organisations, the Chamber of Commerce and tourism sectors.

"People are saying if they are coming behind the project there must be something wrong.

"They must just want to fill their pockets, they want construction so they can give tenders to their friends...

"This is the political climate we are facing in many areas in the world.

"But 2032 is an example that we are getting out a message that is working."

Indonesia, host of the 2018 Asian Games in Jakarta and Palembang, could also bid in 2032, alongside a potentially historically joint effort between North and South Korea.

Buenos Aires was also tipped as a viable option to stage the Games by Bach following their successful staging of this month's Youth Olympics.