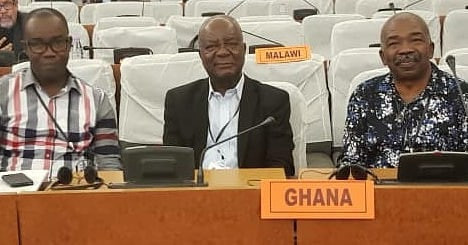 The Ghana Olympic Committee (GOC) have announced they have won the rights to host the 2023 African Games.

It will be the first time the country will stage the multi-sport event.

Ghana's Deputy Sports Minister Perry Okudzeto confirmed they were bidding for the event last month, with suggestions the effort would be centered around one city, most likely the capital Accra.

GOC President Ben Nunoo Mensah claimed the country had held off the challenge of Egypt to stage the Games.

"Technically Ghana has won the bid for the 2023 African Games but we should wait for the delegation to return and do the formal announcement," he told Ghanaian radio station Happy FM.

"Egypt were the biggest threat to Ghana winning the bid, but the Ministry put up a good bid."

Local reports have also claimed that Nigeria and Burkina Faso submitted bids for the Games.

The decision would appear to give the Association of National Olympic Committees of Africa (ANOCA) some much needed security over the future of the event.

The organisation were left scrambling to find a host for 2019 following the withdrawal of Equatorial Guinea in November 2017.

Morocco stepped in as hosts back in July.

The 2019 Games are set to mark Morocco's first participation at the continental event since the 1978 African Games in Algiers.

The dispute over Western Sahara, which Morocco claims is part of its territory, led to Morocco being outside of the African Union for three decades.

They were readmitted to the body last year.

It would be the first time Morocco has staged the event, first held in the Republic of Congo's capital city Brazzaville in 1965.

Brazzaville hosted the last edition of the Games, which were hit by a series of high profile withdrawals, largely due to a lack of Olympic qualification opportunities.

Next year's Games are expected to act as Olympic qualifiers for several sports.