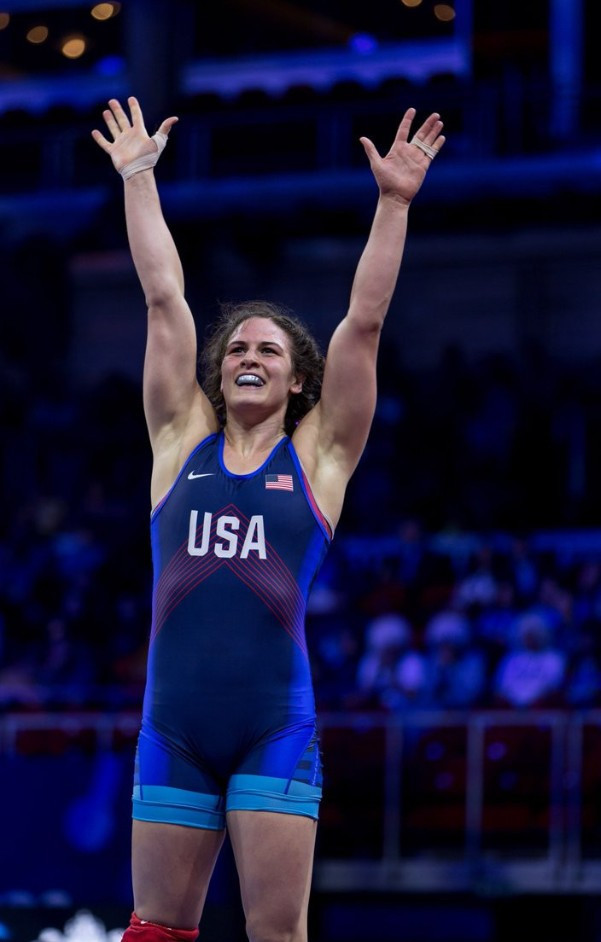 The 27-year-old, who won gold at the World Championships in 2012, 2014 and 2015, picked up another when she beat Yasemin Adar from Turkey by technical superiority.

With Adar herself also a world champion, beforehand it was thought the match could be close, but as it turned out it was anything but.

Afterwards, while dancing around in the mixed zone, Gray said she "can’t believe it".

"I did such a good job today and I'm so proud of myself," she said.

The bronzes in the category were won by Canada's Erica Wiebe, who in 2016 won Olympic gold in Rio, and Japan's Hiroe Minagawa Suzuki, who picked up hers by default as her opponent Zsanett Nemeth of hosts Hungary was unable to wrestle due to injury.

In the other categories, at 72kg the gold was won by another North American, though this time from Canada.

Justina Di Stasio beat Nasanburmaa Ochirbat from Mongolia 4-2 to claim the world title in what was a battle of former world bronze medallists.

This year's bronze medals in that event were won by Turkey's Buse Tosun and Austria's Martina Kuenz, who in doing so picked up her country's first women's wrestling medal since 2000.

The 68kg gold was won by Alla Cherkasova from Ukraine.

She saw off Koumbe Larroque from France, who by the end was clearly struggling with a leg injury after an awkward hold from her opponent.

The Frenchwoman still managed two takedowns in the last minute but by that point she was too far behind.

The bronzes were taken by Tamyra Mensah from the US and China's Feng Zhou, who won hers by technical superiority against Maryina Mamashuk from Belarus.

In what was the first gold medal match of the night there was significant drama.

Finland's Petra Olli was given the gold, but only after a lengthy challenge that saw the lead change twice after the match had finished.

Olli's opponent Danielle Lappage scored a takedown in the very last second which appeared to win her the match on criteria.

However, Olli then challenged the decision, arguing the takedown had come too late, at which point she was then given the victory by criteria instead.

It took some time for the officials to come to a decision, meaning for a few minutes no-one was sure who had won.

Just before that the two bronzes were picked up by Uzbekistan's Iryna Netreba and Ayana Gempe from Japan.