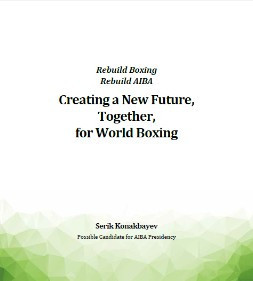 Serik Konakbayev, who is seeking nomination to contest the Presidency of the International Boxing Association (AIBA), has officially launched his campaign manifesto to Make Boxing Great Again.

Konakbayev, who hopes to challenge the interim President, Gafur Rakhimov, at AIBA's Congress in Moscow on November 3, must first have his eligibility confirmed in a hearing at the Court of Arbitration for Sport (CAS) on October 30, having been ruled out for submitting his nomination forms to AIBA on September 24, a day after its deadline.

If the 58-year-old Kazhak administrator, a boxing silver medallist in the light welterweight division at the 1980 Moscow Games and President of the Asian Boxing Confederation, is unsuccessful in his appeal it will mean no candidate standing against Rakhimov.

Konakbayev has sent copies of his Manifesto to all National Federations, setting out his programmes in detail.

It comes after an attempt by the Kazakhstan Boxing Federation (KBF) to postpone the election in support of their candidate was rejected by CAS.

"The ideas you will read about in the Manifesto to develop our great sport include the opinions and voices of boxers, coaches and many National Federation representatives," Konakbayev said.

"At this crucial time in our history we must strengthen our sport before any other priority."

One of the key points, Konakbayev proposes, return the sport's Olympic dividends to the National Federations via the Continental Confederations.

"From the Rio 2016 Olympic Games, AIBA received over 17 million USD," he writes.

"From the Tokyo 2020 Olympic Games, AIBA might receive a similar amount or slightly more from the International Olympic Committee.

"I believe we should seek Congress’s approval and endorsement to distribute all funds to the Confederations first.

"AIBA should have full trust in Confederation's management in assisting National Federations with this fund based on their needs."

Other proposals include greater financial transparency and more representation for women at the highest-level and a bigger role for former boxers in technical matters.

Konakbayev is also promising that he will rebuild trust in AIBA, although he admits the organisation may need a rebrand and has proposed changing the name of the governing body to "World Boxing" so "that our image is changed".

He added: "We need to return our focus on boxing as a sport to enhance the quality of our overall governance, financial integrity and the strength of our brand.

"Everything I have achieved in life is because of boxing and it is time for me to give back to the sport.

"By working closely with the IOC, I will ensure our sport remains on the Olympic programme.

"I am very confident that I will be permitted to stand for the Presidency at the upcoming AIBA Congress in Moscow on November 3."

AIBA said today they had allowed Konakbayev to pursue his campaign as a "gesture of fair play" while welcoming the decision by CAS to reject the KBF request.

"With the order to dismiss this application, CAS has ensured that the AIBA Congress and AIBA elections will continue as planned," they said.

"Furthermore, in regards to the on-going procedure between Serik Konakbayev and AIBA, AIBA has shown goodwill and cooperation to ensure that this case be fast-tracked.

"As a further sign of fair-play, while CAS is making its expedited review, AIBA has further provided exceptional consent to Konakbayev to pursue a campaign of his own volition under the same conditions as the approved candidates who have fulfilled the eligibility criteria."

The IOC has explicitly warned that the Rakhimov's candidacy puts boxing's place on the Olympic programme in serious jeopardy.

The IOC has "maintained its freeze on all contacts with AIBA except at a working level" because of the issues at the troubled governing body, including Rakhimov's election as President.

Rakhimov  remains on a United States Treasury Department sanctions list as "one of Uzbekistan's leading criminals", although in July he was removed from a list of alleged criminals who faced arrest if they entered Uzbekistan.

Rakhimov has hinted he may step aside even if he is elected President should the "issues" with the IOC and the sport's place on the Tokyo 2020 programme continue after next month's Congress.

He told insidethegames last week that AIBA and Olympic boxing were "more important than any candidate and that includes me".