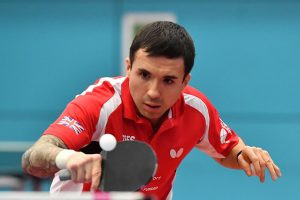 British Paralympic champions Will Bayley and Rob Davies are among the players to have made it through to the knock-out stages of the 2018 International Table Tennis Federation (ITTF) Para World Championships in Lasko-Celje in Slovenia after the second day of competition.

Fresh from beating Czech Republic’s Daniel Horut yesterday, Bayley started his men’s class seven Group B match against France’s Stéphane Messi in great form and was quickly 2-0 up at the Zlatorog Arena.

But Messi, the world number seven, is a former Paralympic champion and forced his way back into the contest.

After taking the third set 11-9, he pushed Bayley all the way in a tense fourth set which the world number two and defending champion was relieved to win by the same scoreline.

"I felt that I played some of my best table tennis in the first two sets, especially in the second set," Bayley said.

"I just wanted to close it out in the third set and maybe I forced it a bit.

"When he won it, he gained a bit of confidence and started moving me around and played tactically smart against me, so I’m really grateful to pull through and looking forward to the quarter-finals.

"To be honest, I haven’t got a brilliant record in the group stages - I always seem to come through them but scrappily and then I seem to gain momentum and that is what I feel like I’m doing again here.

"Hopefully in the quarter-finals I can push on again."

As one of the top four seeds, Bayley has received a bye into the quarter-finals tomorrow afternoon.

After a dominant performance yesterday against Frenchman Alan Papirer, men’s class one competitor Davies was unable to reproduce that form today and lost 8-11, 8-11, 11-13 to Argentina’s Fernando Eberhardt, the Pan American champion.

"I really struggled to get into it and that was the difference in the end.

"At the moment it is a bit raw.

"I know I didn’t play as I can so I’ve got to look forward to the next match now.

"We knew it was something I had to work on coming in here so I’ve still got lots to do."

Davies is set to play Argentina’s Guillermo Bustamante Sierra in the last-16 tomorrow.

The 2018 ITTF Para World Championships are due to finish on Saturday (October 20).

A total of 21 singles titles are up for grabs.