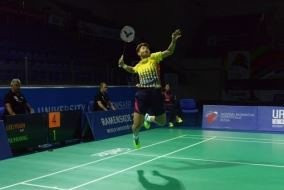 Lin Chun Yi got them off to a flying start with a 21-8, 21-6 win over Mathieu Morneau in 22 minutes before Lin Jhih Yun put them 2-0 up with another straight sets win over Giselle Chan.

Having thrashed Canada, the favourites then went and beat India by the same scoreline, although the tie was somewhat closer than the score line suggests.

The third match of the tie, a singles encounter between Lee Chia Hao and Jindal Kartik lasted 44 minutes.

Elsewhere in the competition, China won three matches today to top Group B.

They beat Russia and Singapore 5-0, but had a much tougher time of it against Thailand before prevailing 3-2.

Group C is being led by the hosts Malaysia, who whitewashed both the United States and Australia on this opening day, while South Korea lead a much tighter Group D.

With one win each, South Korea and Poland both have two points, but the Koreans sit top having not yet conceded a game, whereas Poland lost two in their match against Sri Lanka.