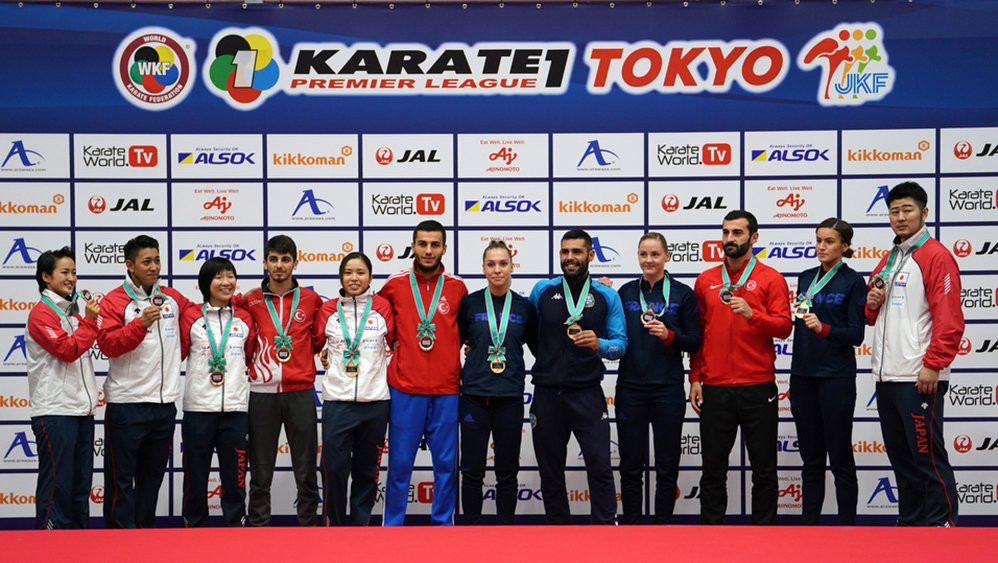 The Karate-1 Premier League season came to a close in Tokyo with the Grand Winners in each category confirmed.

Six of the overall Grand Winners ended their seasons with gold in Tokyo's Budokan.

Nineteen-year-old Philippe won the highest award of the season in the under-61kg category in her first senior season.

Philippe took gold in Tokyo with a 1-0 victory over Peru's Alexandra Grande.

Compatriot Agier also took the gold with a 1-0 win in the under-68kg kumite event.

Her opponent was Switzerland's Elena Quirici.

In the male kumite under-60kg event Turkey's Eray Samdan finished his Grand Winner season off in style with a 4-1 win in the final against France's Kajith Kanagasingam.

His team-mate Burak Uygur had an easier final as his opponent Hiroto Shinohara was a no-show.

Uygur took home the gold and the Grand Winner title by "kiken" in the men's under-67kg.

Turkey had further success in the male kumite under-84kg event through Ugur Aktas.

He won gold with a 3-0 defeat of Japan's Rikito Shimoda.

The 2018 GRAND WINNERS are here! These are the new Best of the Best of the 2018 Karate 1-Premier League! #Karate https://t.co/mdLgomWUua pic.twitter.com/H120uWEkrr

"I had studied my opponent, and when the bout started, I felt really good, so I am happy that I could get the gold medal.

"It is great to be a Grand Winner.

"It means that you have to perform at a great level throughout the year.

"It gives me the confidence to continue next year and to keep getting more points for the Olympic standings."

The hosts had something to celebrate as Grand Winner Ryo Kiyuna won the male kata by unanimous decision over team-mate Kazumasa Moto.

"This tournament is very important as it is one of the few major international events being held in Japan," he said.

"I am very thankful to all the spectators that filled up the arena today.

"We could show them how great the international karate competition is.

"I hope that this great sporting demonstration was a fantastic motivation, especially for kids."

In the female kumite over-68kg competition, Ayumi Uekusa was beaten by France's Nancy Garcia in the final for the Tokyo title.

Whilst Garcia takes the Tokyo gold, Uekusa was crowned the season's Grand Winner.

Elsewhere other Grand Winners were crowned despite not taking the season finale gold.

Spain's Sandra Sanchez won the Grand Winner title in the female kata but was beaten in Tokyo.

Japan's Kiyou Shimizu won the final with a 4-1 decision.

Turkey's Serap Ozcelik was crowned the female kumite under-50kg Grand Winner but Miho Miyahara took the gold in Tokyo with a 5-2 win over Spain's Gema Morales.

Shiori Nakamura of Japan took the Premier League gold with a 6-0 demolition of Kazakhstan's Sabrina Zakharova, whilst Italy's Sara Cardin was made Grand Winner of the female kumite under-55kg.

Azerbaijan's Rafael Aghayev is the male kumite under-75kg Grand Winner, but it was Italy's Luigi Busa who won the Tokyo final 3-1 over Japan's Yuta Mori.

Finally, the male kumite over-84kg Grand Winner is Germany's Jonathan Horne but the home fans cheered Hideyoshi Kagawa to a 2-0 upset over Gogita Arkania of Georgia in Tokyo.

A special ceremony will be held in Paris, France in January to officially recognise the 2018 Grand Winners.

The event at the Budokan was a dress rehearsal for karate's Olympic debut at Tokyo 2020.