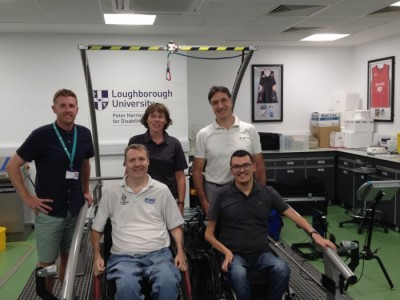 A Low Point Challenge tournament run by the International Wheelchair Rugby Federation (IWRF) will take place in Nottwil in Switzerland later this month, in conjunction with a classification research project.

The tournament is for players from the 0.5, 1.0 and 1.5 categories only who have some of the most severe mobility limitations in their shoulders, arms and hands.

It means the athletes get a chance to play in more offensive and ball handling roles than they would in the Paralympic discipline.

The research project, which is being run in partnership with the Peter Harrison Centre for Disability Sport in Loughborough in England, will look to gain more evidence as to how different impairments effect a person's ability to play wheelchair rugby.

It is hoped that the data the project collects will help improve the sport's classification system, with evidence-based research a key requirement of the International Paralympic Committee classification code.

As part of the project, consenting players at the tournament will be asked to complete an anonymous survey and an "isometric strength test" to determine the impact of arm impairments on upper body strength.

The players who take part will also be tracked and filmed during all the matches they play.

"I always enjoyed playing the low point game and have often talked about how my most enjoyable game was probably the final at the low point tournament in Munich in 2003," said IWRF President Richard Allcroft.

"It's now one of the IWRF's plans to develop different disciplines of the Paralympic version of our sport.

Barry Mason, a senior research associate at the Peter Harrison Centre, said it is "fantastic" to be able to work with the IWRF.

"At the low-point tournament in Nottwil we will continue this collaboration but will also be working with researchers from the University of Padova in Italy," he said.

"This ever-growing international collaboration should enable us to understand more about the effects of impairment on strength, but also the relationship to sports performance."

The competition in Switzerland will go ahead from October 26 to 28.