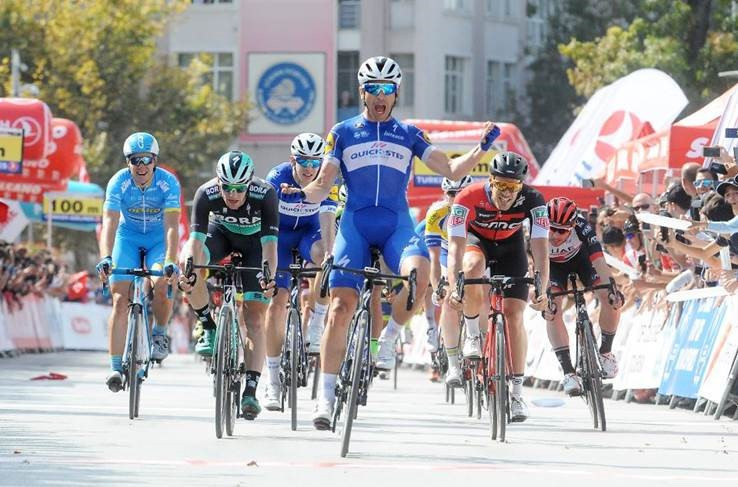 Maximiliano Richeze of Quick-Step Floors won the first stage of the 54th Presidential Cycling Tour of Turkey today as his team-mate Fernando Gaviria crashed out in the closing kilometres.

The 35-year-old Argentinian, who won in Turkey 10 years ago, dominated on the 148.4 kilometre course ahead of Ireland's Sam Bennett from Bora-Hansgrohe and Luxembourg's Jean-Pierre Drucker from BMC Racing, to claim the turquoise jersey as leader of the World Tour race.

The red jersey for king of the mountains was taken by Spain's Benat Txoperena for Euskadi-Murias.

The race began in the centre of Konya with 138 riders lined up in front of the Mevlana Square.

Local rider Feritcan Şamlı attempted to breakaway from the start, with four riders joining him to open up a two minute gap early on.

As the peloton reached the top of the first climb, the gap to the front had reached two-and-a-half minutes, while Txoperena picked up big mountains points on both that and the second climb of the race.

With 40km to go the gap to the leaders was down to 1min and 20sec and then it was cut to under a minute when home rider Muhammed Atalay of  Torku Sekerspor. attacked from the bunch with 29km to go.

The gap was finally cut entirely with 13km left in the race.

With 3.6km left, Gaviria's crash largely derailed the lead-out sprint, but Quick-Step Floors were able to finish on top regardless, with Richeze taking the win to give his team their 70th victory in 2018.

The veteran rider caught his opponents napping with just 600 metres to go and opened up a gap that proved unassailable, as by the time Drucker and Bennett hit top speed, Richeze was already celebrating.

The veteran officially finished in 3:29:14, with Bennett four seconds behind and Drucker a further two seconds adrift.