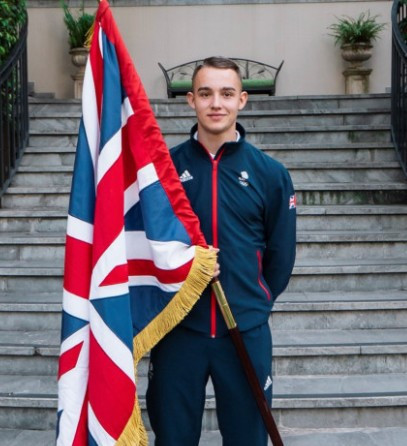 Britain has chosen BMX racer Ross Cullen as its flagbearer for the Opening Ceremony of the Summer Youth Olympic Games here today.

The 17-year-old, due to compete in the mixed team event tomorrow alongside Elissa Bradford, was selected by his fellow athletes following a vote.

The Opening Ceremony here will break from the tradition of a stadium celebration to a street party in downtown Buenos Aires at the famous Obelisk landmark.

Preston-born Cullen, who has twice been world junior BMX champion, is due to lead out Team GB’s 43-strong athlete delegation with the Ceremony officially starting 12 days of action across the city.

Britain are set to be represented in 17 of the 32 sports with Buenos Aires 2018 the third edition of the Youth Olympic Games following Singapore 2010 and Nanjing 2014.

"It’s an honour to have been selected for the Youth Olympics and represent BMX but it’s even more special to be chosen as flagbearer," said Cullen.

"It’s amazing to be picked by my fellow athletes.

"It felt like I’ve got on with everyone and it’s a really good group and strong team here so I’m really pleased they’ve picked me to lead the team out."

"Even just getting off the plane and seeing all the buses branded up and then walking into the [Athletes'] Village for the first time - it’s quite surreal actually.

"The atmosphere here has been amazing and I’ve met so many different athletes from all around the world.

"I’ve loved being here and I’m going to make the most of it.

"In terms of competing I’m going to give it all I’ve got on Sunday.

"It’s about taking each race as it comes early on and getting through and then once through qualifying then I can start enjoying myself.

Mahdi Choudhury, Britain's Chef de Mission for Buenos Aires 2018 said: "From the first day of coming together Ross has embraced the event and being part of Team GB.

"With 43 athletes selected from 17 sports, coming together as one Team GB is an important part of our first few days at the Youth Olympics and Ross has really enjoyed that challenge and been a big part of our team ethos."