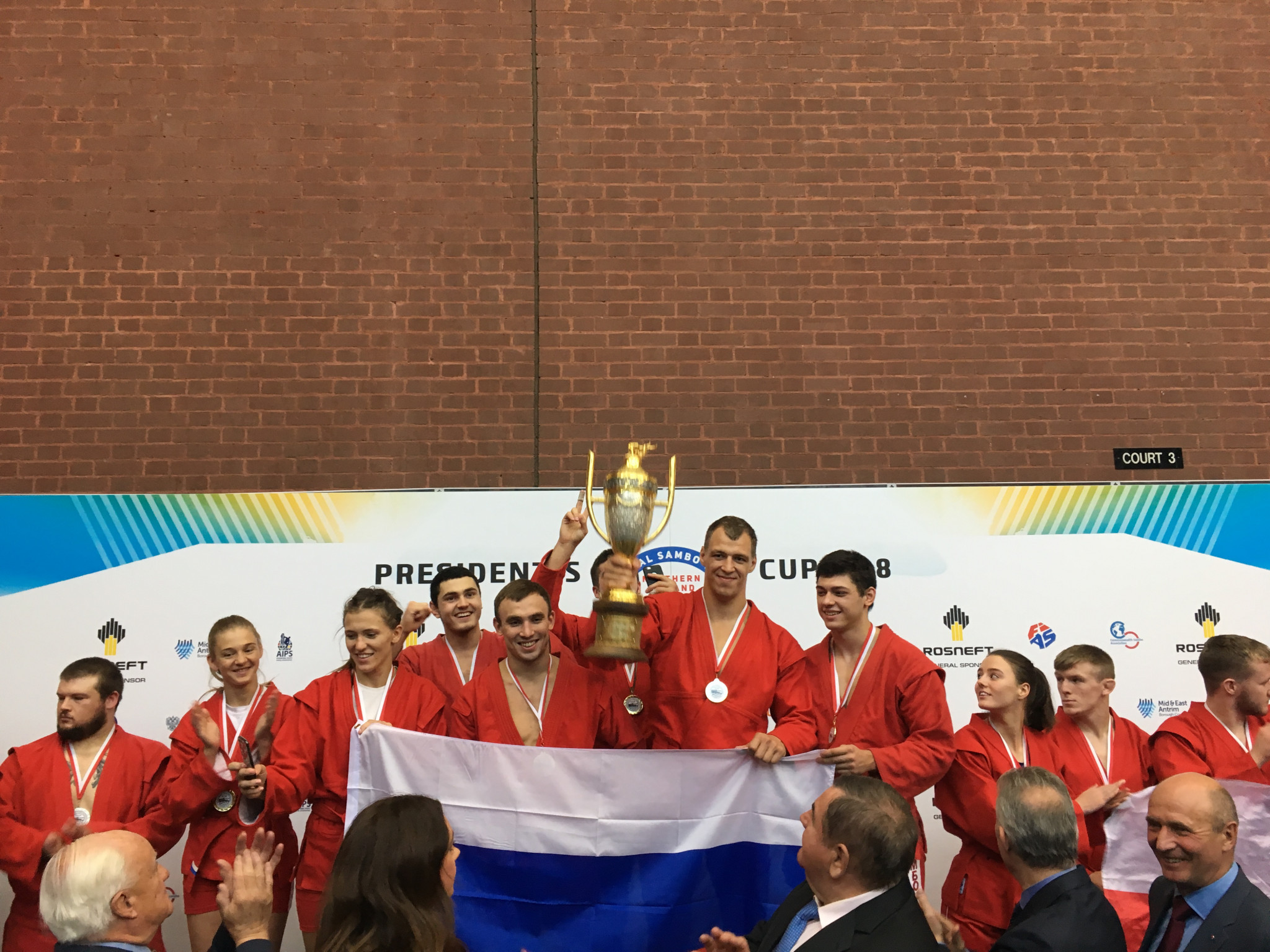 Russia have won the International Sambo Federation (FIAS) President's Cup for the fifth time today, after emphatically beating a joint team of the United States and Canada 6-1 in the final here in Ballymena in Northern Ireland.

The competition, which always takes place in the United Kingdom, has been held four times before and Russia, where the martial art originates, have always triumphed.

Having comfortably beaten The Netherlands and then Cameroon earlier in the day to make the final, the favourites went 1-0 up in the gold medal match at the Severn Towers Leisure Centre thanks to Evgenii Anishchenko, who beat Leonardo Esteban Subiza in the 74 kilogram class 8-0.

Artur Panaitov then put Russia 2-0 up by beating Talon Howard Morris by an equally emphatic scoreline, 9-1, but it was not all to go Russia's way.

In the third bout of the final, in the 90kg category, an impressive performance from Alfred Brown saw him beat Vladislav Medvedev 8-0 despite having looked under pressure early on.

That result ensured the team of North Americans made it onto the scoreboard, but as it turned out, that was as good as it would get for them.

The fourth match, in the men's 100kg class, was won 7-2 by Russia's Denis Ivkin, and then his compatriot Dimitri Eliseev took the next bout in the over-100kg class 8-0 against Mark David Lawrence.

That result gave Russia an unassailable 4-1 lead, meaning the President's Cup was theirs.

It did not end there though, with the Russians claiming both women's bouts as well.

Earlier in the day, in a speech given to those in attendance, FIAS President Vasily Shestakov praised the organisers, saying the level was "very high".

"The big family of sambo unites all the countries here," he said.

Shestakov also expressed a hope that more events in the future could be held in Ballymena, where prior to today, no sambo events had taken place.

"Of course, this tournament will still be held over the next few years and I think we will come back here in Ballymena to do some of the other editions," he added.

Also taking place today were a number of individual bouts in combat sambo, in which Russia picked up another two titles.

The gold medal in the men's 62kg class went to Alexander Dontsov, who beat Trinidad and Tobago's Keron Bourne in the final 4-0, while bronze in that category went to England's Bryan Creighton.

In the men's 74kg class the gold was won by another Russian, Adam Tadiev, who saw off Johnson Jajoute from the US in his final by the same scoreline.

In that class bronze was shared by Adrian Corbiere from France and Felipe Homeylev from The Netherlands.

The final two golds were both won by Cameroon.

Bertrand Batamag took the top prize in the 82kg class, by beating France's Wesley Kouassigan in a well fought contest 3-1.

Batamag's compatriot Michael Tchamou then won the final gold by beating Trinidad and Tobago’s Martin Joseph in his final 4-0.

The bronze medals in each of those categories went to Brian Jones from the US and Canada and Paul Rodgers from England in the 82kg class, and Malek Aouiat from France and Sammy Tufts from hosts Northern Ireland in the 100kg.