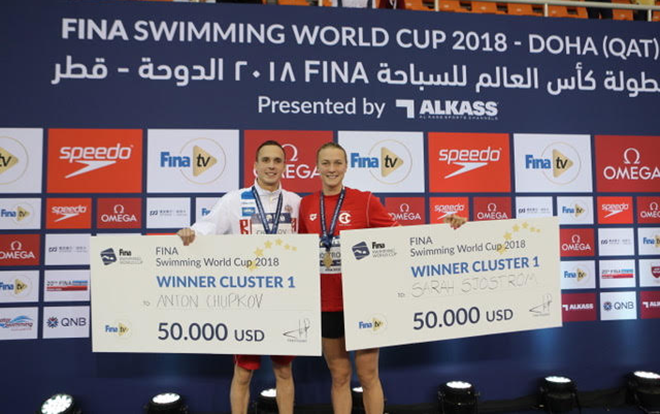 Anton Chupkov of Russia and Sweden's Sarah Sjostrom head into the second cluster of the International Swimming Federation (FINA) World Cup season in Eindhoven tomorrow in dominant positions as they seek more points - and more prizes.

After the opening World Cup events in Kazan and Doha, Chupkov and Sjostrom are provisional leaders of the men's and women's rankings with 120 and 90 points respectively.

They were the first beneficiaries of the $50,000 (£38,000/€42,000) prize on offer to the leader of each cluster when the last World Cup event concluded in Qatar on September 15 following five new World Cup records.

The opening meeting in Kazan had provided an even richer haul of seven new World Cup marks.

In the women's competition, Olympic and world champions Katinka Hosszu of Hungary and Yulia Efimova of Russia have moved to positions of second and third, with 90 and 78 points respectively.

Second in the male rankings is the hugely promising United States swimmer Michael Andrew, who won the 100 metres butterfly races as well as the 50m backstroke in Doha.

He has 87 points, with third place, on 84 points, currently occupied by last year's overall runner up Vladimir Morozov of Russia.

A total of 185 swimmers are registered to compete in the three-day event in The Netherlands, at the Pieter van den Hoogenband zwemstadion.

Other big names involved include Mitch Larkin of Australia, Pieter Timmers of Beligum, Laszlo Cseh of Hungary, Felipe Lima of Brazil, Emily Seebhom of Australia, Chad le Clos of South Africa, Blake Pieroni of the US, Alia Atkinson of Jamaica, Mehdy Metella of  France, Daiya Seto of Japan and David Verraszto of Hungary.