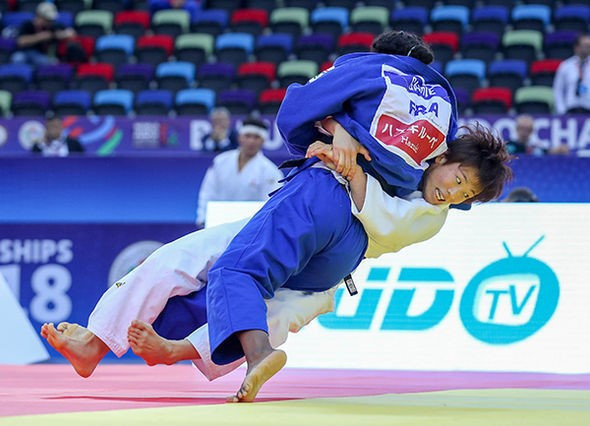 The format consists of six matches, three men's and three women's, and will make its debut on the Olympic programme at Tokyo 2020.

The Japanese team defended their title with a 4-1 win over France in the gold medal match.

In the final, Hisayoshi Harasawa began Japan's path to victory as he beat France's Cyrille Maret after two minutes of golden score in an over-90kg match.

World champion Tsukasa Yoshida then made it 2-0 to Japan overall by scoring a waza-ari on France's Priscilla Gneto.

Yoshida then held down the French judoka with a ushiro-kesa-gatame for ten seconds to take the win in the under-57kg category.

The third match was the men's under-73kg bout in which Arata Tatsukawa forced three shidos from France's Guillaume Chaine for the win.

With the overall score at 3-0, Japan only needed to win one more match to retain their title.

Gahie made the scores 3-1 by countering Ono for ippon in the match.

In the final match that was contested, Shoichiro Mukai took the win for Japan over France's Axel Clerget at under-90kg.

Mukai beat the French judoka by ippon to seal the contest for Japan, 4-1.

Russia and the Unified Korea team took the bronze medals.

Russia beat hosts Azerbaijan in the bronze medal match 4-1, with the country's President Vladimir Putin in attendance during the day.

With the score at 2-0 to Russia, home favourite Hidayat Heydarov halved the Russian advantage by defeating Musa Mogushkov in the under-73kg fight.

Twenty-one seconds was all that Alena Prokopenko needed to increase Russia’s advantage as she threw Gunel Hasanli for ippon with a ura-nage at under-70kg.

Mikhail Igolnikov was the hero for Russia as he made it 4-1 and took the bronze medal for his country.

In the other semi-final, the unified team from South and North Korea made history.

A 4-0 win over Germany meant that it was not only the first time that a unified Korea team took part in the World Judo Championships, but also their first medal.

In the opening contest of the over-90kg men, 18-year-old Minjong Kim threw Sven Heinle of Germany to put Korea ahead.

Youjeong Kwon then doubled the Korean lead with a win over Amelie Stoll in the under-57kg match, as world champion Chargrim An made it 3-0 with victory over Igor Wandtke at under-73kg.

In the final match, Sun Yong Kwon beat Laura Vargas Koch for a 4-0 win at under-70kg and a medal for the unified Korean team.