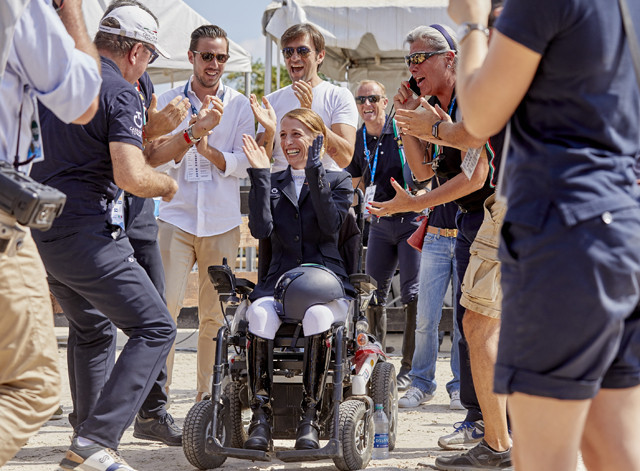 Paralympic champion Sanne Voets became the first non-British rider to win three gold medals in one major international championship as she won the grade IV competition on a day of freestyle action that concluded the Para dressage at the World Equestrian Games in Tryon.

The Dutch rider, on board Demantur NOP, completed a hugely successful showing at the event at the Tryon Stadium and her triple-gold feat was swiftly matched by team-mate Rixt van der Horst, who won the grade III event.

The day was also distinguished, less than two years out from the Tokyo 2020 Paralympics, by Japan securing its first Para dressage medal at this event, with Tomoko Nakamura and Djazz F winning a surprise bronze in a grade V category won by Britain’s Sophie Wells.

Sara Morganti of Italy took her second gold of the Games in securing the grade I freestyle title, while the grade II gold went to Denmark’s Stinna Tange Kaastrup.

The Netherlands finished top the medals table with five golds, two silvers and two bronze, followed by Britain with two golds, and one silver.

Denmark were third with two golds and a bronze, Brazil were fourth with two silvers, and the hosts fifth with one silver and three bronzes.

Voets scored 79.645% to finish ahead of Brazil’s Rodolpho Riskalla on Don Henrico who posted 77.780%, with bronze going to Kate Shoemaker of the hosts on Solitaer, who recorded 73.230%.

“I couldn’t be happier!”

There was high drama when Britain’s Paralympic champion Natasha Baker was thrown from her horse, Mount St John Diva Dannebrog, during her test, eliminating her from the competition.

What a day to finish on for the #ParaDressage! 2 x Triple Gold & 3x Double Gold Medallists are taking home some serious bling tomorrow!

After winning her landmark bronze in the grade V event, Nakamura said: “I was so nervous and it went so quickly and I feel so honoured to be in such a big competition."

A score of 80.150% was more than enough for Wells to pick up her second gold of these Games riding C Fatal Attraction, with The Netherlands’ Frank Hosmar and Alphaville N.O.P taking silver with 79.155%.

Morganti was riding Royal Delight, her horse for the past eight years, and scored 78.867 ahead of Rihards Snikus on King of the Dance, who recorded 76.113% to pick up his first ever global medal.

“It’s incredible and so big an emotion I can’t even describe it,” Morganti said after waiting for confirmation of her win.

The two victories will have helped Morganti put the disappointment of Rio 2016, when her horse didn’t pass the compulsory veterinary check, behind her.

“I needed to come out here with my horse and show how good she is,” she said.

Kaastrup, riding Horsebo Smarties, posted 78.947%% to take the gold in grade II ahead of Austria's Pepo Puch on Sailor’s Blue with 75.500.