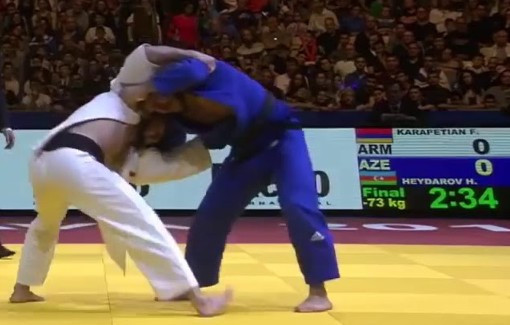 The Azerbaijan Judo Federation (AJF) has accused Armenia of lying over the reason for their decision not to attend the 2018 International Judo Federation (IJF) World Championships here, having cited security concerns.

As reported by JAMnews, the question of the team’s safety was discussed not between Governments, but between the AJF and European Judo Union (EJU).

Fears were mainly expressed for the team’s trainer Armen Nazaryan and star athlete Ferdinand Karapetyan, who beat Azerbaijan’s Hidayat Heydarov to the men’s under-73 kilograms title at this year’s European Championships in Tel Aviv.

The Armenians claimed they feared he would not be properly protected.

Commenting on the situation, the AJF told 1news.az: "This is yet another Armenian lie.

"This is how it was during the first European Games [in 2015] and during other international competitions.

"Moreover, we presented the [Armenian] Ministry of Sport with an official letter which confirms that Azerbaijan guarantees the security of all participants on a State level."

Nazaryan claimed Azerbaijan did not provide any guarantees relating to security.

"We were told that the guarantee of security given to all other athletes would be enough for us, and that there was no need to take separate, 'personal' measures," he said.

"This leaves room for doubt.

"Thus, the Azerbaijani side, not having presented a guarantee of security, used the opportunity to deprive Ferdinand Karapetyan, who had a real shot at the medal, of participating in the World Championship.

"In 2018, he was the European champion, having won against an Azerbaijani athlete."

JAMnews reported that Nazaryan and Karapetyan were in Georgia’s capital Tbilisi while negotiations between the AJF and EJU were taking place.

They waited for news about a guarantee of security in order to leave for Baku, but ultimately returned home to Yerevan.

Tension has existed between Azerbaijan and Armenia ever since the two countries received independence in 1991 following the break-up of the Soviet Union over ownership of Nagorno-Karabakh, a landlocked region in the South Caucasus which lies within Azerbaijan's internationally recognised borders.

More than 30,000 people were killed and 1.2 million displaced before Russia brokered a cease-fire in 1994.

Armenian athletes have participated in several sports events in Azerbaijan, including the European Games three years ago.

In the months leading up to the Games, Nagorno-Karabakh, inhabited predominantly by ethnic Armenians, provoked more tension after Azerbaijan shot down what it claimed was an Armenian military helicopter on their territory east of the mountainous region, killing three crew members.

It took much mediation to find a solution to allow Armenian participation at Baku 2015.

The 2018 World Judo Championships are scheduled to run until September 27.

Had Armenia been represented at the event, Karapetyan would have been competing today in the men's under-73kg category.

Home favourite Heydarov was beaten in the semi-finals by Japan's Soichi Hashimoto before going onto defeat Mongolia's Tsogtbaatar Tsend-Ochir in their bronze medal match.