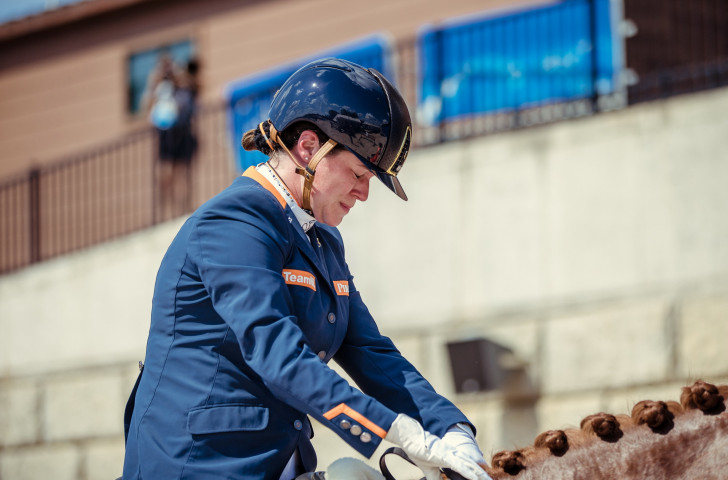 The Netherlands have taken command of the Para dressage team competition at the International Equestrian Federation (FEI) World Equestrian Games in Tryon.

The team is currently on a total of 150.038 points with three more riders, including individual Grad III champion Rixt van der Horst, to come.

Denmark and Britain are closest to the Dutch with scores in the mid-140s and both have two more riders to go ahead of the final day of the competition.

All the French riders have finished their competition, and the team totalled 199.998 points.

In the Grade II test, Denmark’s Stinna Tange Kaastrup was first to ride and put her country in a strong position.

On her individual championship winning Horsebo Smarties, Kaastrup posted a score of 74.848 per cent ahead of The Netherlands’ Nicole Den Dulk, who scored 72.939 per cent on Wallace N.O.P.

Britain’s Lee Pearson recovered from his retirement earlier in the week to ride Styletta to a score of 71.606 per cent.

On Demantur N.O.P she posted a massive score of 76.550 per cent to raise the pressure on the British team.

Could the @TeamGBR Para Dressage domination be about to come to an end?! @Ruiters have set a formidable score on day 1 of the team competition but can GB rise to the challenge today?! https://t.co/0eGpcPzMfl pic.twitter.com/tELFEFeNl3

The Dutch dominance came despite Britain’s Sophie Wells giving her team the best possible start to the competition in the first test of the day, the Grade V.

Riding C Fatal Attraction, Wells scored a personal best of 77.233 per cent, the highest of the day and just a fraction off the world record.

She was nearly four points ahead of the second highest Grade V scorer Frank Hosmar, from The Netherlands.

Speaking after her ride, Wells said: "You learn to deal with the pressure and I just focused on what I needed to do.

"We want to retain our title but we can only do the best that we can do.

"I am so happy with my horse and I love him to bits.

"I knew I needed to up my game from the other day for the team.

"I had a look at my test with my coaches and looked at different areas."