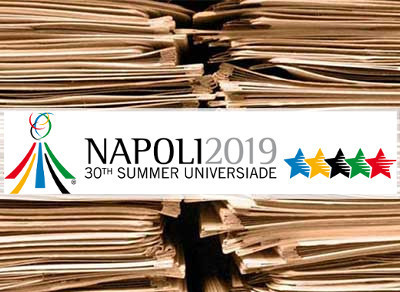 Security, renovation work and "sanitary services" were discussed at a Naples 2019 directors’ meeting at the Campania region headquarters in the city, it has been reported.

"Everything is moving forward well," Lentini, who is attending the lighting of the Universiade flame for Krasnoyarsk 2019 today, told Italian news agency ANSA afterwards.

"CUSI and FISU have noted progress in organisation, and on September 28 in Lausanne at the FISU Executive Committee meeting, we will be present with a delegation to present the Naples plan."

According to ANSA, 80 countries have already accepted invitations to participate in the Summer Universiade, due to take place between July 3 and 14 next year, with the eventual total expected to be around 160.

There have been moments of disruption during the organisation of the Games, originally supposed to take place in Brasília before the Brazilian capital withdrew for financial reasons.

Once Naples was chosen as a replacement, there were then disputes over where to house the athletes, with it now decided around 4,000 of them will be accommodated on cruise ships in the port, with the rest put up in a mixture of hotels and university halls of residence.

"Everything's okay I think we can do it, progress has been made," Saintrond added.

Renovation work is underway at the San Paolo Stadium, scheduled to host the Opening and Closing Ceremonies, while it is claimed contracts for improvement work at all the relevant venues will be awarded by the end of next month.

With regard to security, the need for an accurate control system when organising transport to the venues was reportedly the highest concern, with CONI reaffirming their availability to help.

A further meeting is reportedly scheduled for next week to establish a plan.