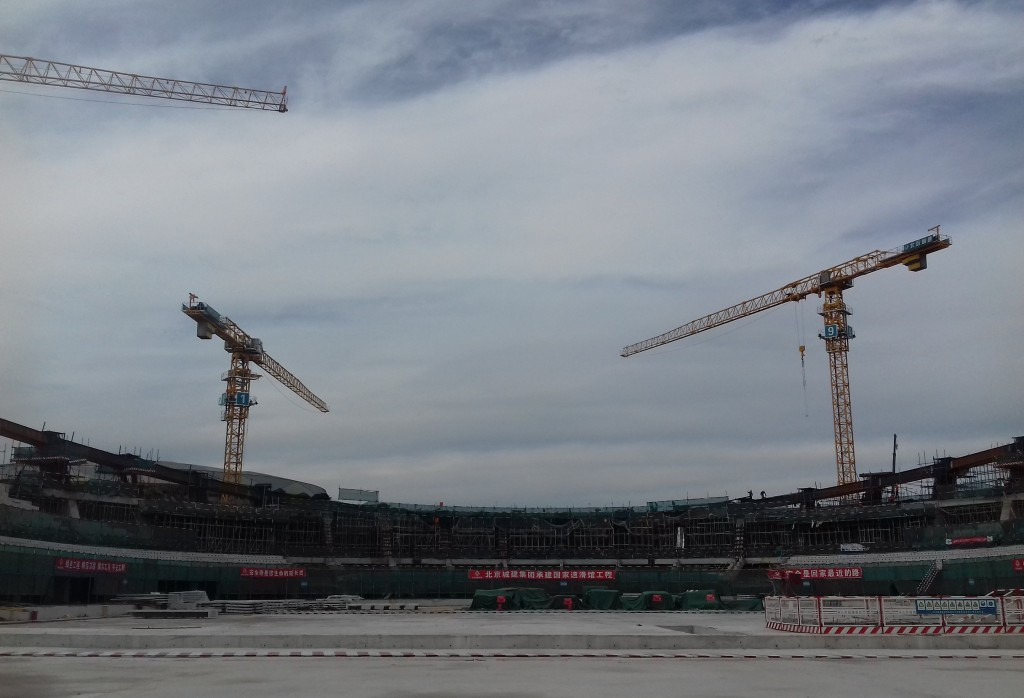 Progress at the Beijing 2022 speed skating and curling venues was assessed today during a visit to several competition sites for the Winter Olympic Games.

The International Olympic Committee (IOC) Coordination Commission were provided with updates from Chinese organisers about the status of work at the venues, as well as their post-Games legacies.

The speed skating venue is one of the new facilities being constructed for the Winter Olympics in four-years time.

Organisers stated they are working closely with experts from the International Skating Union to ensure the venue's ice will allow for the fastest times possible.

The venue's ice system is expected to be complete by next October, with the roof structure of the facility - which has been likened to a tennis racket - expected to be concluded by the end of this year.

Dubbed the Ice Ribbon, owing to the 22 ribbon-like patterns on its design, the venue will boast a capacity of 12,000.

Following the Games, Beijing 2022 say the Oval will serve as a national team facility and hold public fitness, leisure and cultural events.

Located nearby, in the Olympic Park from the Beijing 2008 Summer Olympics, the Water Cube was another of the venues visited by the Commission.

The National Aquatics Centre will be turned into the "Ice Cube" for the Winter Olympics, with curling competition set to take place in the arena.

The 4,500 seat venue underwent experimental tests on two possible solutions in April to provide the right ice conditions for competition.

The World Curling Federation are said to have been impressed with the plans, with a demountable system set to be in place.

It is envisaged that the venue will be used for swimming and diving during the summer months in China post Games, before becoming a curling and figure skating venue in winter.

The expectancy is that the first transition between the summer and winter months will take six weeks, but that conversion between the two would speed up over time.

Ice making facilities at the venue are expected to be in place by next October.

"I think we have had no surprises here, we have seen things are going very fast and very professionally," said Juan Antonio Samaranch, the IOC Coordination Commission chair.

"It is good to know there will be a permanent legacy to switch from ice to the water cube.

"Everything we see is impressive."

The Commission began their tour in the Shougang Industrial Park in the west of the Chinese capital, located close to the Beijing 2022 headquarters.

Similarly to the headquarters themselves, the big air venue will have been transformed from an industrial building to a facility for the Games.

The former steel mill site was closed down before the Beijing 2008 Summer Olympics over concerns of air pollution at the time.

It is now going through a re-generation into a permanent venue for Beijing 2022, featuring a 60-metres-high ramp for big air snowboarding that will rise against the backdrop of cooling towers and smokestacks.

The Beijing Olympic Tower was also visited by officials, with the site overlooking the 2008 Olympic Park.

The Bird’s Nest Stadium, one of the venues in the park, will be used for both the Opening and Closing Ceremonies.

The Beijing Olympic Village, one of three being built for the Games due to the multiple clusters, was also visited.

Samaranch stated that an IOC team visited venues in the clusters outside Beijing over the past couple of days.

This included the Xiaohaituo Alpine skiing venue and the sliding centre being constructed, both of which are in the Yanqing cluster.

"We are pretty confident," Samaranch said.

"Over the weekend out IOC team visited venues and the reports we received from them are extraordinary.

"The amount of work, investment and intelligence being deployed in those projects is already remarkable."