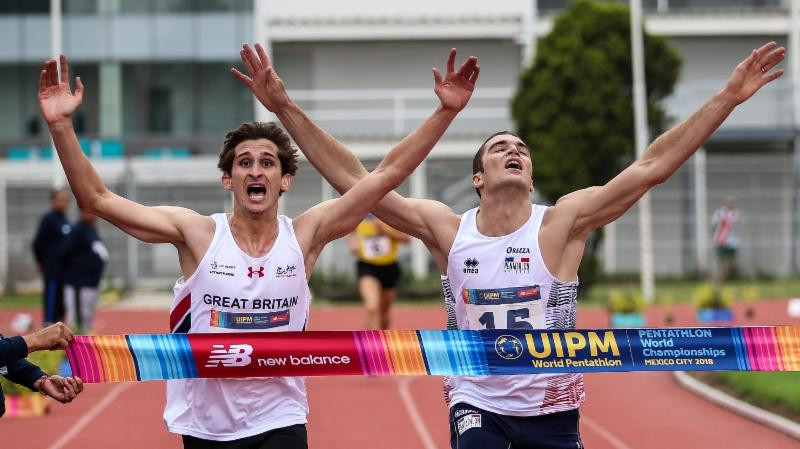 Jamie Cooke produced one of the most extraordinary finishes ever witnessed at the International Modern Pentathlon Union (UIPM) World Championships to become the first British male world champion for 25 years.

France’s European champion Valentin Prades looked sure to take gold at the Mexico City course and began celebrating with 50 metres left, with Cooke in third at that point.

But the 27-year-old Briton, who had begun the final laser-run discipline in seventh place after the swimming, fencing and equestrian elements, made a final, spectacular charge for the line.

First he passed Ukraine’s Rio 2016 silver medallist Pavlo Tymoshchenko, and then drove on to arrive at the Frenchman’s shoulder as he raised his arms in triumph at the line, clocking 11min 31.16sec, with Prades second at 0.03sec, and Tymoshenko taking bronze at 6.67.

Both men finished with 1,435 points, with Tymoshchenko totalling 1,429 ahead of the Czech Republic’s Jan Kuf, who scored 1425, one point more than Egypt’s Ahmed Hamed.

"I've worked so hard for this.

"I was really struggling on that last lap but then I pushed on.

“I saw Valentin go past me and I just thought ‘oh no’, but I just dug in and kept going to see what would happen, and I just found in the last 100m that I had something left in my legs.”

The 31-year-old triple Olympian Tymoshenko had left the shooting range for the final time in the leading position, but he was overtaken by his two younger rivals on the final 800m run.

Prades had moved up from 14th place before the laser-run and when he moved into the lead the result seemed clear.

“I started 14th after a bad riding event, but I said ‘OK, run like a crazy boy at the Olympics, and we will see,'” Prades said.

“I started slowly, because at altitude a lot of people are dead after two laps.

“We had a big training camp at altitude and I knew I was ready.

“Not a very good finish, because Jamie passed me in the last metre, but I’m so happy because it was a special season for me.

“I was injured and I didn’t start to run until March… but I am European champion and now I am world silver medallist.”

Home runner Alvaro Sandoval was never far off the pace, and finished seventh.

"Here in the Olympic city of Mexico City, the UIPM 2018 Pentathlon World Championships have come to an end and we saw, for the first time in history, the Pentathlon Stadium - a temporary pool and all five disciplines in one stadium," said UIPM President Dr Klaus Schormann.

"The athletes performed at the highest level, and this was underlined with the finish to the men's laser run today."