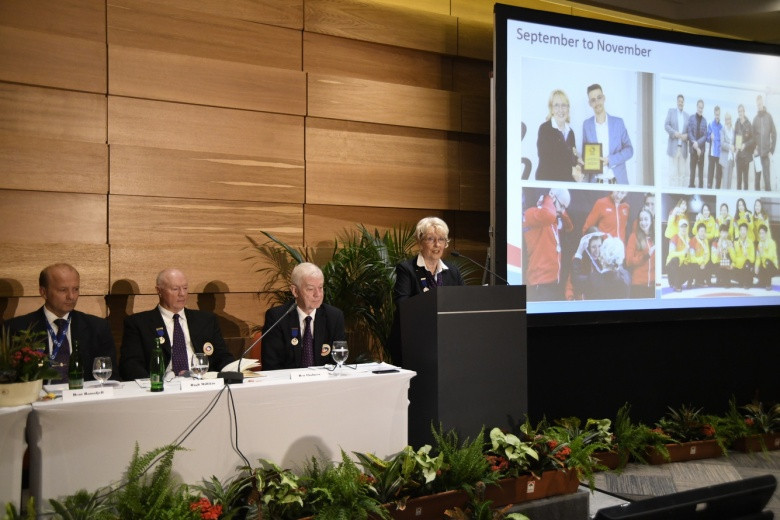 Kate Caithness was formally re-elected as President of the World Curling Federation (WCF) as members voted to change the format of the World Mixed Doubles Curling Championship.

Scotland's Caithness was running unopposed to a third term so her election at the organisation's Annual General Assembly in Budapest was a formality.

She is one of only two female Presidents of an Olympic sport alongside triathlon's Marisol Casado.

"After a healthy debate, our members have tasked the Federation with adopting a new format for the World Mixed Doubles Curling Championship - our newest Olympic Winter Games discipline - to improve its elite status," said Caithness, who was voted back in unanimously and will serve another four-year term.

"This has been a particularly special Congress and Annual General Assembly for me, as I begin my third term in office."

"Dedicated curling facilities have always been and will continue to be my priority, however knowing how quickly the last eight years have passed, I must look to the future regarding succession planning to ensure when it is time for me to hand over the baton, the knowledge and experience I have gained during my terms in office will be passed on to my successor."

It was also announced that Nigeria has been voted in as a provisional member of the WCF, therefore becoming the first African member.

Beau Welling from the United States was voted in as a new board director, replacing the retiring Andy Anderson.

Caithness said she was "delighted" to welcome him onto the Board.

She also extended a "warm welcome" to Nigeria.

Other changes announced during the Assembly included the decision to hold the Americas Challenge in October/November in future rather than January, and increasing the number of mixed teams able to compete at the Lausanne 2020 Winter Youth Olympics from 16 to 24.