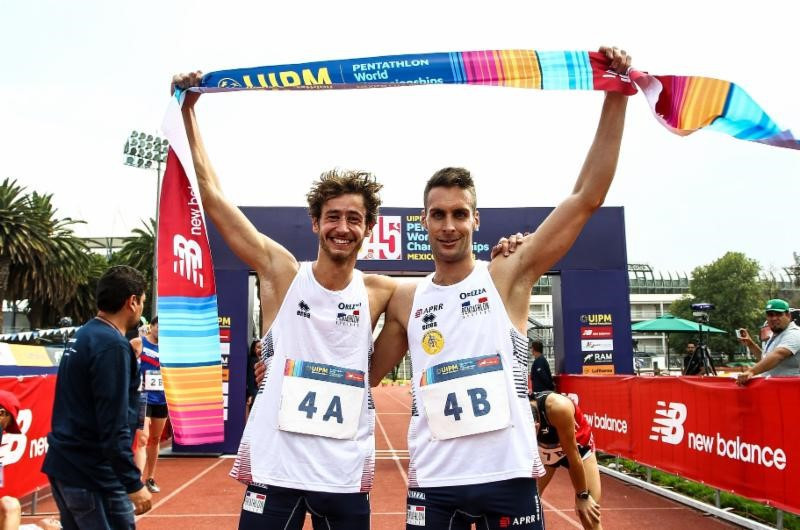 Former junior world champions France returned to win senior men's relay gold together at the International Modern Pentathlon Union (UIPM) World Championships in Mexico City, where for the first time all of the disciplines are being held in the same stadium.

The French team were pushed hard in the final laser-run event by the Czech Republic team of Jan Kuf and Martin Vlach who ultimately took silver.

A surprise bronze went to Bulgaria's Todor Mihalev and Yavor Peshleevski who were in seventh position at the start of the laser-run.

Modern pentathlon features swimming, fencing, riding and then the laser-run, which combines shooting and running.

The Russian team of Oleg Naumov and Egor Puchkarevskiy were the fastest in the swimming event and topped the fencing.

Russia collected 331 points in the swimming alongside the Japanese team of Taishu Sato and Hikaru Shimano.

In the fencing, Russia claimed 23 victories and 11 defeats in the ranking round and added two points in the bonus round.

Ukraine's Dmytro Baliuk and Dmytro Kirpulyanskyy scored 22 victories and 12 defeats while the Kazakhstan and Czech Republic teams were one victory behind them.

In the riding, there was little to separate the top teams as ten out of the 18 scored between 291 and 293 out of a possible 300 points.

South Korea's Kim Soengjin and Lee Woojin suffered elimination in this round which ended their hopes of securing a third successive gold medal in the event.

The competition was still close by the start of the laser-run, causing a lot of congestion at the start line.

Ukraine set off first, followed by Russia who started a second behind them.

France and the Czech Republic started off shortly afterwards.

France's Henrard took the lead in the early stages but the Czech Republic’s Kuf was in tow.

After the final visit to the shooting range, Vlach had the lead into the final lap but Belaud chased him down to win the gold for France.

The Czech Republic team took the silver, with Bulgaria in bronze.

Belaud and Henrard finished the event with 1,518 points, followed by the Czech Republic with 1,513 points and Bulgaria with 1,482 points.

"It's a good start to the Championships, and it was nice to compete with Alexandre for the first time since the Junior World Championships in 2013," Belaud said.

"Now we are seniors and today was very good, Alex had a great day and I would like to thank him.

"In the laser-run he allowed me to take first place; the Czech man [Vlach] was very strong but in the last 800 metres I had him in my targets, and I was able to get to the line.

"With five sports in the same arena it's a very good atmosphere for the public, and it's very easy for us too."

UIPM President Dr Klaus Schormann said: "The second day of the UIPM 2018 Pentathlon World Championships brought us an exciting final where we saw France and Czech Republic running for the gold medal and there was another historic moment for our movement when Bulgaria won their first medal at the World Championships for more than 30 years.

"Congratulations to these three teams but also to all the athletes who competed so well today.

"This Pentathlon Stadium is a fantastic motivation for our athletes and we had a wonderful crowd here in Mexico today."

The event continues with the mixed relay tomorrow.