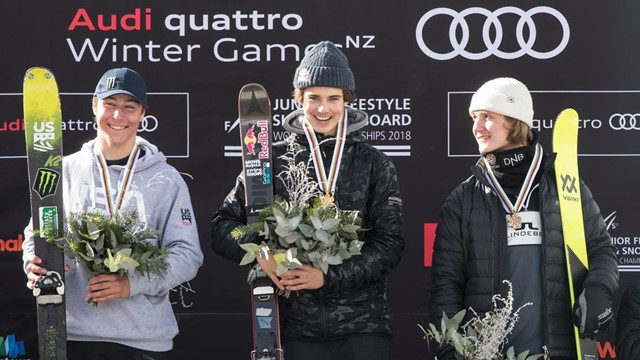 Hosts New Zealand claimed gold through Nico Porteous in the men's freestyle skiing halfpipe as the Junior Freestyle Ski and Snowboard World Championships came to a close in Cardrona.

The 16-year-old Olympic bronze medallist from Pyeongchang 2018 qualified in first place for the final and came away with the title.

The home favourite sat in second after the first runs due to a deep landing on his switch 1080 but he managed to cleanly execute his second and final run.

"It's my first Junior World Champs and to come away with the win is really cool.

"It's all about going forward from now on."

Norway's Birk Ruud and New Zealander Ben Harrington looked set to take silver and bronze until the third last run of the day.

American Dylan Ladd scored 92.80 in his final run to steal the silver medal and pushed Ruud into third on 91.80 and Harrington out of the medals.

In the women's event Estonia's Kelly Sildaru followed up her slopestyle gold medal with gold in the halfpipe, scoring 92.90.

She led the competition in all three of her runs and was pleased with her performance.

"Today I did my first nines since my injury [a year ago] so I’m pretty stoked."

Sildaru missed the 2018 Pyeongchang Winter Olympics due to a knee ligament injury.

Russia's Valeriya Demidova took the silver medal on 84.80 with China's Kexin Zhang in third on 80.60.