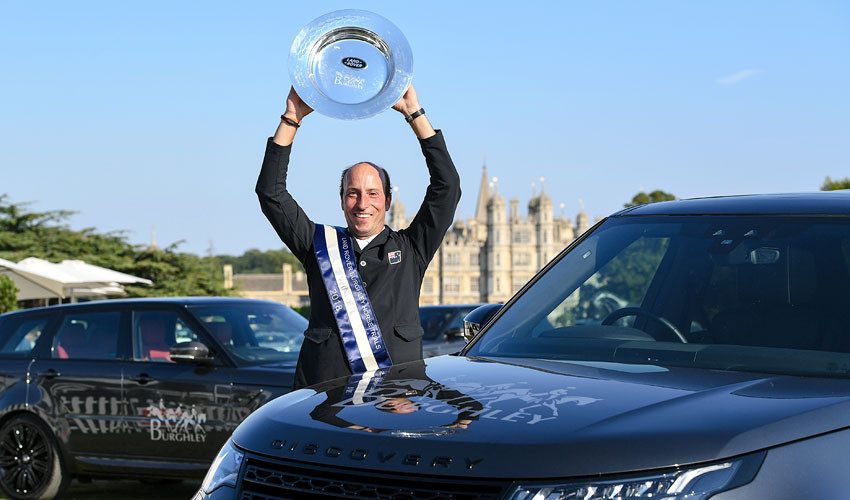 Price had moved up from second place after an impressive performance on Ringwood Sky Boy in the cross-country test at the annual three-day event that has been held at Burghley House in Lincolnshire since 1961.

Three British riders were in contention to overtake him on the final day of show jumping, including defending champion Oliver Townend, second by just 0.6 points after a clean cross-country which saw him finish as one of only four riders inside the time limit.

French, on Vanir Kamira, moved out of contention for the title when he picked up four faults at the gate, moving down to fifth.

Townend and Ballaghmor Class knocked a pole down, but stayed ahead of Andrew Nicholson and Swallow Springs, who had moved up after a clear round.

Tim and Jonelle Price are only the second married couple to win the Badminton and Burghley horse trials in the same year. The last time was in 1971 when it was Princess Anne and Capt Mark Phillips. Tim won Burghley today - Jonelle won Badminton in May @1NewsNZ pic.twitter.com/7MY1EsHJH9

It meant only Price, who finished fifth on the same horse last year, could stop him retaining his title – and the Wiltshire-based rider duly did so with a clear round.

Price finished on 27.3 points, with Towend on 31.9 and Price’s compatriot Andrew Nicholson and Swallow Springs on 32.1.

This has thus been a year to remember for Price and his wife Jonelle, who won the two Spring events at Luhmuhlen and Badminton.

Both riders now head off to the World Equestrian Games in the United States as key members of the New Zealand team.

“What a super year,” said Price.

“Sky Boy deserves a good day - so often we nail two out of the three phases, so to finally pull them all together in a major competition is fantastic.

"This win means everything and I’m super proud of my horse.”

British riders filled the next five places as Sarah Bullimore was fourth with Reve Du Rouet after jumping clear.

French and Vanir Kamira dropped from third overnight to fifth after the mare lowered the gate.