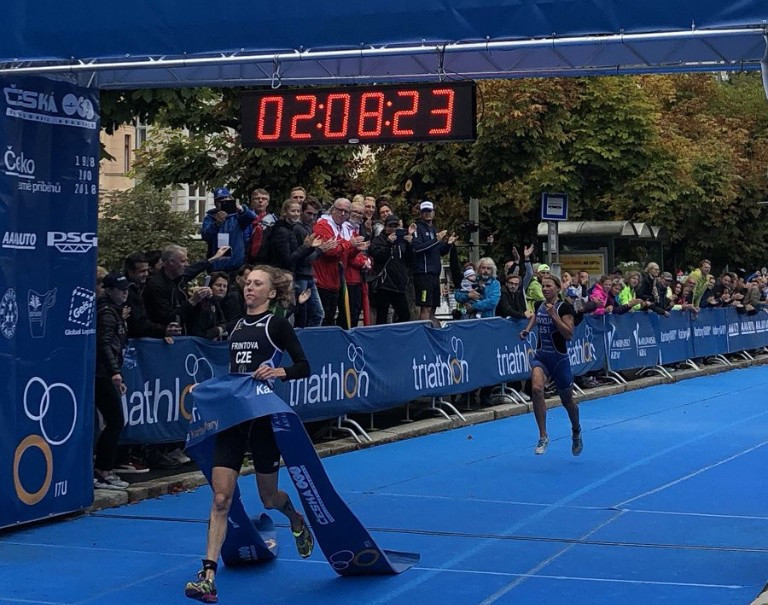 Home favourite Frintová was hoping to improve on the silver medal she claimed last year at the event, held over an Olympic distance format of a 1,500 metres swim, 40km bike and 10km run.

She spent much of the race as part of a group seeking to close on Britain’s Lucy Hall, who came out of the swim with a near 30 second advantage over the nearest athlete.

Hall saw her advantage closed during of the bike leg but the Briton narrowly lead into the final transition.

She was chased and then passed by Estonia’s Kaidi Kivioja, Germany’s Anja Knapp, Italy’s Verena Steinhauser and Frintová.

Italy’s Annamaria Mazzetti came through to challenge for the victory as she battled with Kivioja and Frintová in the closing stages.

Frintová won the battle to claim home victory as the Czech athlete finished in a winning time of 2hr 8min 22sec.

Kivioja finished just one second back as the runner-up, while Mazzetti rounded off the podium of a closely-fought race in 2:08.27.

And it is Russia’s Dmitry Polyanskiy who delivers the win at the 2018 #KarlovyVaryWC after a powerful breakaway that left Ireland’s Russell White and Italy’s @alefabian1988 with no option but to collect second and third after a brilliant race from the three of them! pic.twitter.com/vDnZVPWoqT

The men’s race was also decided on the run, with Polyanskiy among those chasing the victory during the 10km section.

The Russian attacked in the final of the four run laps and was able to stay clear until the finish of the event.

Ireland’s Russell White was forced to settle for second place after finishing 14 seconds off the pace of the winner.