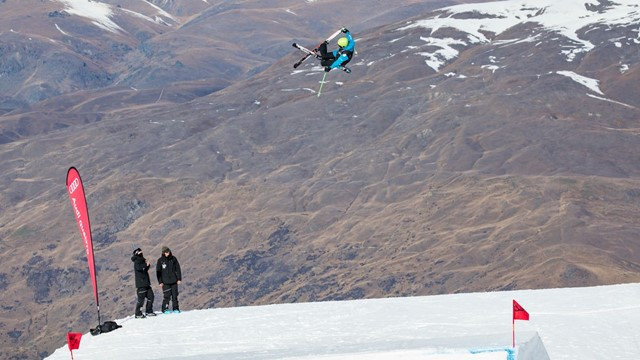 In the women’s event at the Cardrona Mountain Resort in New Zealand, podium places were decided by each athlete’s top scoring run of three.

Tatalina went big with a switch bio nine front corking rotation that is unique amongst female competitors, landing her in the top spot with 90.40 points ahead of Estonia’s Kelly Sildaru, who scored 84.80.

“It’s my first time I’ve won in a big competition.”

Bronze went to Lana Prusakova of Russia, who scored 80.20.

Huge amplitude and progressive tricks helped Forehand to his title as he totalled 185.00 points, with compatriot Ryan Stevenson taking silver on 184.20.

A score of 182.20 earned bronze for Spain’s Thibaut Magnin, allowing him to block an American clean sweep, with Cody Laplante of the United States a point behind in fourth.

“On the second run I did a trick (switch triple cork 1620) I’ve only landed once before so I was so happy to land that.”

Takeru Otsuka of Japan lived up to his top qualifying position today as he earned gold in the snowboard big air final.

Luka Winkelmann of the United States took silver with 182.40, ahead of Canada’s William Buffey, who scored 166.20.

Yesterday’s high winds had forced the men’s big air final to be postponed until today.