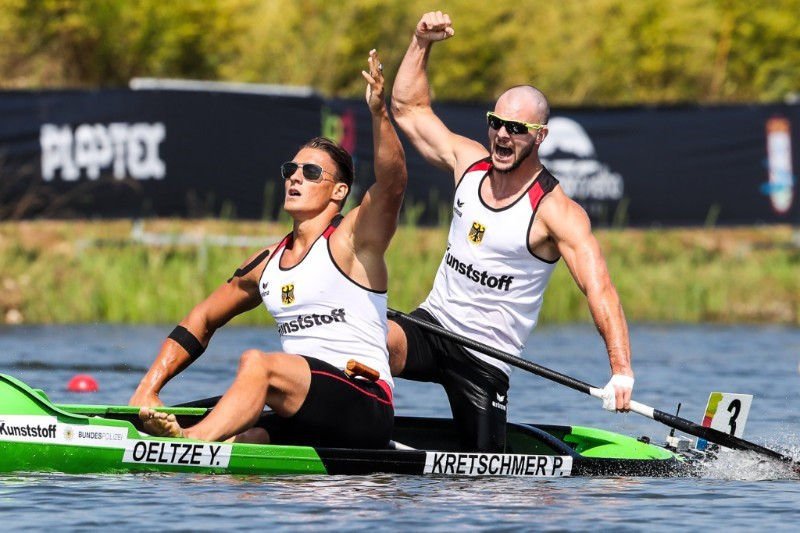 It came on a great day for the country which saw them also win the only other Olympic discipline contested - the men's K2 1,000m.

Oeltze and Kretschmer timed in at 3min 38.207sec with Cuba's Serguey Madrigal and Fernado Enrique second.

Bronze went to Kirill Shamshurin and Ilya Pervukhin of Russia.

The title has not been defended since Marcin Kobierski and Michał Sliwinski did so for Poland in 2002.

"Every time you win it's a great feeling, and when the win is a little bit of history, it’s even more exciting," Kretschmer said.

Both men were in Germany's K4 boat which won Olympic gold at Rio 2016.

"Last year was a bad day I think, because we had fast times but we weren't able to show it on the day," Gross said.

"Today we showed we were able to do it again.

"Every time you go on the start line and paddle again, the fire inside the belly burns to win again."

Six other finals were held in non-Olympic events.

There was a first C2 men's 200m title for Belarus as Dzianis Makhlai powered home with Hleb Saladukha in 37.646.

Czech Republic's reigning European champion Martin Fuska was third with all three set to duel in the Olympic C1 1,000m class later at the event.

He triumphed in the men's KL2 category over 200m in Portugal, the same event in which he won gold at Rio 2016 during the sport's Paralympic debut.

McGrath, a former member of the Australian army who lost both of his legs when stepping on a landmine in Afghanistan in 2012, has now won this title for four consecutive years.

His time of 41.735 was quicker than the times he set winning last year's world title and the 2016 Paralympic gold medal.

He admitted to facing distractions in the build-up to the Championships.

"That was pretty tough, but we had really great conditions and I was pushed all the way," McGrath said.

"The competition is really heating up, it's two years tomorrow until the Paralympic Games, so it's exciting.

"Momentum is building for the Games.

"It's definitely been difficult.

"I had a good prep for this competition, thankfully I did enough, just."

It was a good day for the latter's country as they won both of the other golds available.

"This is a great result for me," Yemelianov said.

"Now we can look ahead for Tokyo."

Maryna Mazhula then claimed a first major honour by winning the women's KL1.