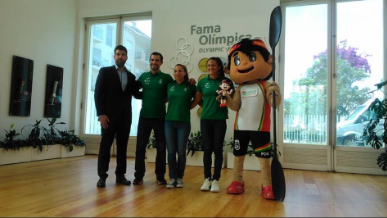 Local hero Fernando Pimenta is the face of the International Canoe Federation (ICF) Canoe Sprint and Paracanoe World Championships that start in in Montemor, Portugal tomorrow.

The 28-year-old London 2012 silver medallist, who won gold and silver at last year's Canoe Sprint World Championships, is the model for the forthcoming event's mascot and has been working hard to promote a competition that will involve more than 1,500 athletes from 80 countries until August 26.

"The first big step is to reach the final and then try to be in the fight for the podiums," Pimenta told local dignitaries and media this week.

The Portuguese athlete will defend his Kayak title over 5,000m against a field that will include the German who took silver in 2017, Max Hoff.

He will also seek a double in the K1 1,000m, where he took silver last year behind another German, Tom Liebscher, who will be defending his title.

The return of sprint canoeing's most successful modern-day female athlete will be one of the highlights in Portugal this week.

The brilliant sprinter took time off after Rio to have a baby, but her long awaited return, and a clash with New Zealand's Lisa Carrington, will be a headline event in Portugal.

In her absence Carrington has dominated the K1 500m, New Zealand has taken a stranglehold on the K2 and Hungary took last year's K4 500m world title even without Kozak.

The K4 500m in both the men's and women's classes will be hotly contested events.

In the women's New Zealand is one year wiser after winning bronze at last year's World Championships.

Germany with Tina Dietze and Franziska Weber, and Hungary with Kozak on board, are also set to once again fight out the medals.

And in the men's, where the 500m will replaced the K4 1,000m at the Olympics, the powerful German team will be looking to defend their 2017 World Championship title.

But Spain, with 2016 Olympic K1 1,000m gold medallist Marcus Walz in the crew, has emerged as a serious contender after a strong win in the Szeged World Cup.

Canadian duo Laurence Vincent-Lapointe and Katie Vincent are expected to dominate the women's C1 events, the new events on the Tokyo 2020 Olympic programme.

Germany headed the medals table at Racice in the Czech Republic last year, with six golds in a total of 12, and they look good bets to maintain that standing a year on.

Brendel is back to defend both his 1,000 and 5,000m titles in the canoe class, as are the gold medallists in the C2 1,000m race, Peter Kretschmer and Yul Oeltze.

Hungary will be looking to maintain the level of performance that took them to second in the table with five golds and nine medals.

Others who will be back to defend their titles include Britain’s Liam Heath, who won the K1 200m, and Volha Khudzenka of Belarus, gold medallist in the K1 500m.

Meanwhile five of the six Paracanoe gold medallists from the Rio 2016 Paralympics will be in action at Montemor, where the opening day's action will be all about the Para events.

Only British paddler Anne Dickens, who retired after winning KL3 gold at Paracanoe's Paralympics debut, will be missing from a quality field which will also see many athletes doubling up as they plan ahead to the introduction of new events at Tokyo 2020.

British duo Jeanette Chippington and Emma Wiggs, both multiple world champions as well as Paralymoic gold medallists, will go head-to-head in the women's VL2 in what is set to be one of the races of the championships.

Chippington will also defend her KL1 world title and Wiggs will be favourite in the KL2.

Wiggs triumphed when the pair met in the VL2 at this year's only Paracanoe World Cup event.

The ultra-consistent Serhii Yemelianov, a gold medallist for Ukraine in the men's KL3 in Rio, will be looking to defend the world title he won in Racice last year.

Australia's Curtis McGrath and Austria's Markus Swoboda, gold and silver medallists in the men’s KL2 in Rio, will renew their rivalry, and will also cross swords in the VL3, another new event for Tokyo.

They will both be challenged by New Zealand’s Scott Martlew, who was a surprise package when finishing a close second behind McGrath in the KL2 in Szeged this year.

The three medallists from the men’s KL1 in Rio, Poland’s Jakub Tokarz, Hungary’s Robert Suba and Great Britain’s Ian Marsden, will do battle again in Portugal, and will also contest the VL2.