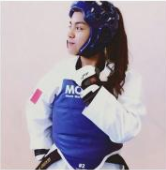 Mexican taekwondo player Claudia Romero has been named as the Americas Paralympic Committee Athlete of the Month for July.

She overcame Peru’s Leonor Espinoza Carranza in the women's up to 49 kilogram final at Spokane in the United States.

Romero is currently Mexico's highest ranked Para-taekwondo athlete, as she lies third in the world rankings.

Brazil’s Elizabeth Gomes ended second with 41 per cent of the vote.

The Brazilian set new world records in both the F52 women’s shot put and javelin at the Berlin Grand Prix.

She had broken the discus world record two weeks earlier in Paris.

Athletes are nominated for the monthly prize by National Paralympic Committees from across the continent.