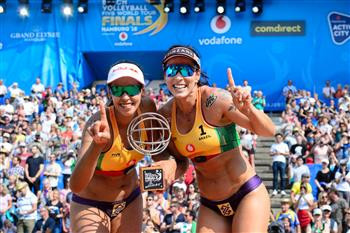 Agatha and Duda defeated the second-seeded Czech pair 21-15, 21-19 in 43 minutes in the Rothenbaum Stadium to pick up the same prize won yesterday by men’s winners Anders Mol and Christian Sorum of Norway in this International Volleyball Federation (FIVB) event.

The gold medallists had come through a huge struggle in their earlier semi-final against fellow Brazilians Maria Antonelli and Carolina Salgado, winning a marathon first set 31-29 and then sealing the match with a 21-19 scoreline in a match that took almost an hour.

Hermannová and Sluková had reached the final with a 13-21, 21-19, 17-15 win over Australia’s Commonwealth Games silver medallists Mariafe Artacho and Taliqua Clancy.

In her previous two appearances in Hamburg Agatha had won silver medals with Barbara Seixas at the 2016 Hamburg Major and Duda in 2017 at the World Tour Finals.

Time for the money! The historic prize money of the #WTFinals goes to @timeagathaeduda! @volei pic.twitter.com/2mNbl1CUwS

In both tournaments, Agatha and her partners were beaten by Germany’s Laura Ludwig and Kira Walkenhorst.

"It is a great feeling to finally win the top spot on the Hamburg podium," the 35-year old Agatha, who, with Seixas, won world gold in 2015 and then lost the Rio 2016 final to Ludwig and Walkenhorst.

"Duda is an amazing partner and she is so young," said Agatha about new 20-year old team-mate

"Our next goal is to return to Hamburg next June for the World Championships.

"We hope we can repeat.

"It will be tough especially with Laura and Kira returning to competition."

The Rothenbaum Stadium is set to be the site of the 2019 World Championships with the 48-team men’s and women’s fields featuring players from all five FIVB confederations, with competition scheduled from June 28 through to July 7.