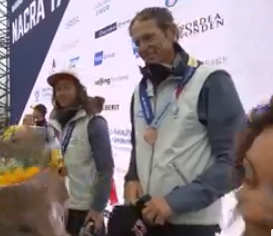 Italy's Ruggero Tita and Caterina Marianna Banti won the gold medal in the Nacra 17 foiling class on the final day of the Sailing World Championships in Aarhus.

It followed the cancellation of the scheduled medal race today in Danish waters as winds proved unsuitable for competition.

The Italian duly finished on a winning haul of 69 points after a crucial victory in race 13.

Australians Nathan and Haylee Outteridge took silver a point behind.

Medal races did take place in the men and women's R:SX windsurfing classes elsewhere today but two Dutch champions had already been confirmed.

Double Olympic gold medallist Dorian van Rijsselberghe remained a class apart in the men's race after only finishing outside the top 10 once in 12 races.

He finished third in the decider to end on 58 points.

Lilian de Geus had been equally dominant in the corresponding women's event.

The 26-year-old Dutchwoman, fourth at Rio 2016, crossed sixth in the medal race to end the series on a superb low haul of 48 points.

France's Olympic champion Charline Picon took a distant silver on 78 points after winning the final race and bronze went to Lu Yunxiu of China, on 82.

Great Britain's Emma Wilson had to settle for fourth place, another three behind.