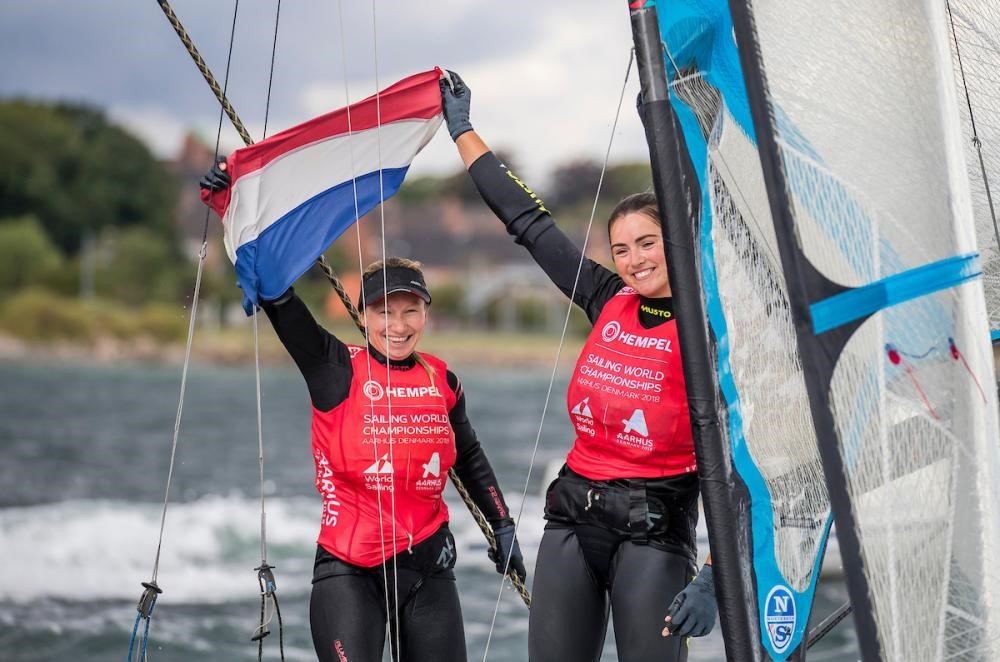 Annemiek Bekkering and Annette Deutz of The Netherlands snatched gold in a dramatic 49erFX medal race as Austrians Tanja Frank and Lorena Abicht capsized after falling victim to a huge wind shift at the World Sailing Championships in Aarhus.

Nicolas Parlier claimed men's kiteboarding gold for France after the medal races were abandoned before starting due to thunder and lightning, as well as heavy winds.

It was a similar story for the women as the abandonment of racing meant Daniela Moroz of the United States was crowned world kiteboarding champion.

Russian Elena Kalinina and France's Alexia Francelli were the recipients of the silver and bronze medals respectively.

Bekkering and Deutz added to the Dutch success in the Danish city as they secured their first world title after winning the medal race.

Frank and Abicht, the overnight leaders, needed to finish sixth or better to wrap up victory on the final day of action in the 49erFX class.

The Austrian pair made a promising start as they took the lead early on before their hopes of sealing the crown were dashed as they went from first to last after capsizing.

The Dutch team were among several crews to see the wind change coming and they took full advantage before crossing the line in first place to clinch the title in dramatic circumstances.

Frank and Abicht were still able to finish in silver medal position despite the disappointment, while the bronze medal was claimed by Sophie Weguelin and Sophie Ainsworth of Britain.

The crews were presented with their medals by the visiting Crown Prince Frederik of Denmark, a member of the International Olympic Committee.

"There were light winds in front of us and we decided to tack out and that's when we noticed that the wind was building up," Bekkering said.

"After 20 seconds we saw so much pressure coming, so we decided to take the risk and stay away from the fleet.

"In the end, we didn't know that the shift was so big, but it paid out big time.

"We've been saying together for five years.

"We won in Palma this year and now the World Championships - this is our year."

The Fantela brothers had earlier wrapped up the 49er gold medal as they controlled their opponents from start to finish in the final race of the regatta.

They went into the medal race 13 points in front of the rest of the field and proved too strong for their rivals.

France's Mathieu Frei and Noe Delpech did enough for silver, while bronze was secured by Olympic bronze medallists Erik Heil and Thomas Ploessel of Germany.

The event in Aarhus is due to conclude tomorrow.