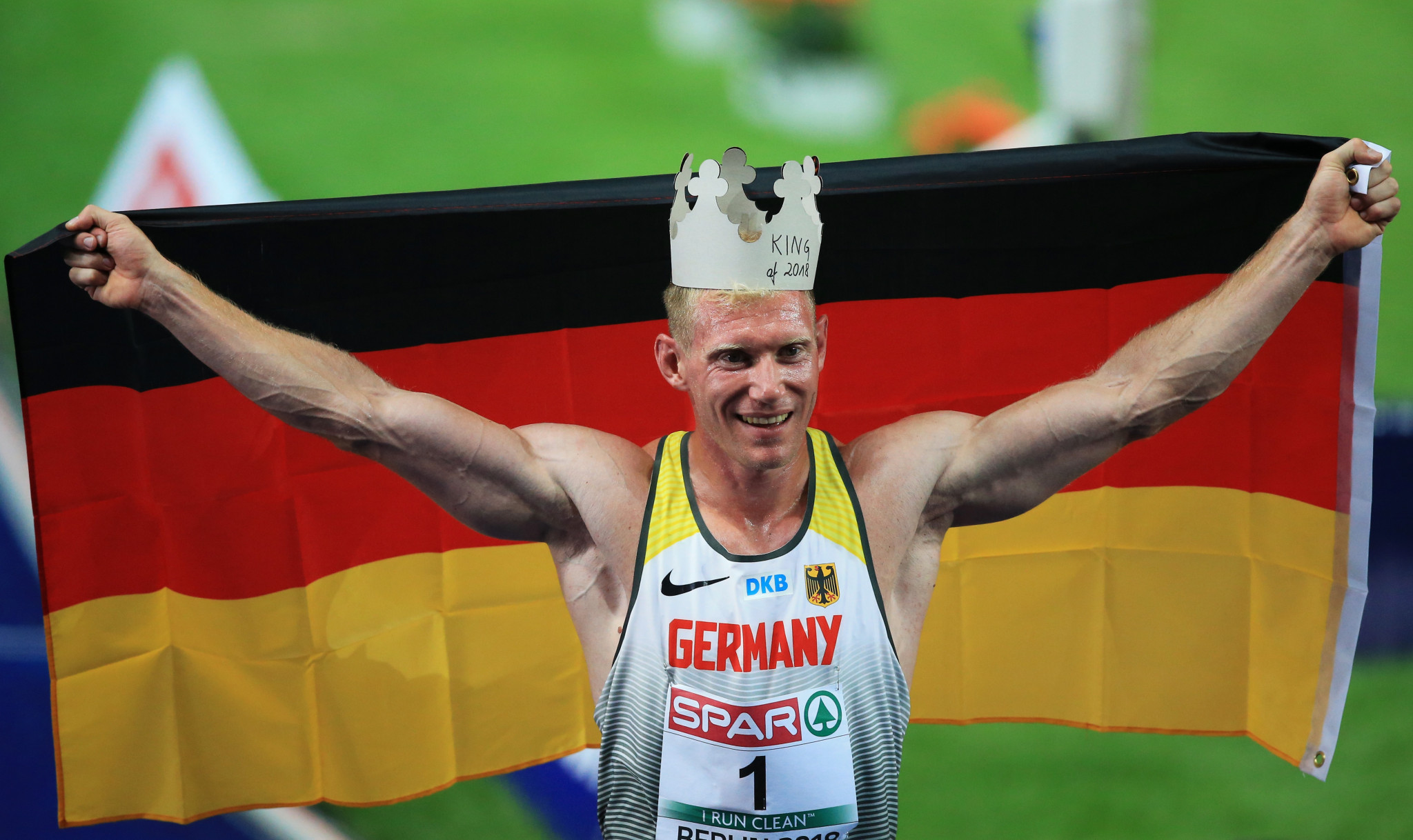 A large majority of the spectators were doubtless hoping fervently for a winning final flourish by their own hero Robert Harting, the 33-year-old making his final appearance for Germany who won the world discus title in this stadium nine years ago and added Olympic gold at London 2012.

When Harting produced a fourth round effort of 64.33 metres - and a deep bellow of achievement from the surrounding fans – it lifted him into silver medal position.

But such was the volatility of this event that he ended in sixth place.

The German fans did, however, witness a golden finale as 32-year-old Arthur Abele produced the result of his career to win a decathlon calamitously - but intriguingly - bereft of France's miscalculating world champion Kevin Mayer.

Gudzius had appeared to have consolidated his winning position in the discus with a fourth round throw of 67.66, but was swiftly usurped by an effort of 68.23 by Sweden's Daniel Stahl.

Another fourth round throw of 65.14 by Switzerland's Lukas Weisshaidinger then proved significant as it pushed Harding off the last international podium he would ever have a chance of inhabiting.

But there was one final twist to come as Gudzius reclaimed his lead with 68.46, with Stahl throwing big on his final response, but fouling in the process.

"To be honest, I really expected to do this in these Championships but it was hard," said Gudzius.

Stahl commented: "It was a beautiful competition and I got silver so I am proud of myself."

As this humdinger of a contest played out, another apparently simpler one was taking place just across the infield as Germany’s 2015 world shot put champion Christina Schwanitz took a big lead with her first throw of 19.19m and advanced stolidly towards what would have been a third consecutive European title with follow-ups of 19.08 and 18.86.

Guba had not managed anything better than 19.02 after five rounds, but threw out to 19.33 on her last go.

Bronze went to Aliona Dubitskaya of Belarus with 18.81.

"I am sorry if I made the local fans upset but I surprised even myself.

"I just wanted to win and it is my first medal from a big competition.

"I am the European champion.

"I cannot believe it."

Another field event briefly promised gold for the hosts as Fabian Heinle took a second round lead with 8.13m in the men's long jump.

But a round later he was back in second place by merit of having a worse second effort than Ukraine's Serhii Nykyforov, who matched his 8.13.

Greece's Miltiadis Tentoglu then rose above this close contest with what proved to be a winning fifth round effort of 8.25.

But Heinle turned bronze back into silver with a final effort that matched his second exactly, giving him two stronger efforts than those of his Ukrainian opponent.

Salpeter's tale of a transfer of allegiance is atypical.

Born in Kenya, she moved to Israel in 2008 as a nanny for the children of Kenya's Ambassador to the country.

There she met running coach Dan Salpeter, whom she married in 2014 and with whom she has a son, Roy.

She was granted Israeli citizenship in March 2016, eight years after she had begun living in her new country, and a few days before the cut-off for Rio 2016 qualification.

So at the end of a night when several other Germans might have delivered the hosts’ first gold of these Championships, but narrowly did not, Abele, a battle-scarred veteran of the decathlon, narrowly did.

Even in the moment of victory, as he laboured home eighth in the event's concluding 1,500m, raising his weary arms to mark a job done well enough, he was bumped over the line by the staggering finisher behind him.

Hands on his knees, he could not immediately respond as Berlino the Bear appeared in front of him to drape a German flag over his shoulders and pop a cardboard crown on his head.

But it was a royally deserved reward for the man who has battled through more than his share of injuries, including recently a torn hamstring, and whose previous career high point was second place in the 2015 European Indoor Championships.

And so he had a stadium to himself, full of home spectators whose hopes of gold had been tantalised and then disappointed until this crowning moment.

World champion Mayer's meltdown in the second event, where he failed to register a single legal long jump mark having opened the day with a competition-leading personal best of 10.64 in the 100m, immediately threw the competition open.

And the withdrawal through injury later on the first day of Belgium’s defending champion Thomas Van Der Plaetsen only increased the intriguing possibilities.

The final action saw Abele defend, and even slightly increase his overall lead to a margin of 110 points as he finished with 8,431, with Authorised Neutral Athlete Ilya Shkurenyov taking silver with 8,321 and bronze going to the fast-finishing Vitali Zhuk of Belarus, who recorded 8,290 to beat Germany's Niklas Kaul by 70 points.

For Britain's overnight leader Tim Duckworth there was disappointment as he slipped from second to fifth after finishing 17th of the 18 finishers on the run, although given that the concluding events of the javelin and 1,500m were his weakest, there was a horrible sense of inevitability about it.

Duckworth sportingly sought out the winner and gave him a hug of which Berlino would have been proud.